Several blogs and sources are reporting that the Expedition Everest ride, in Disney’s Animal Kingdom at the Walt Disney World resort, has been fully lighting the Yeti on the ride.  As most of you know, the yeti originally swung out it’s arm like it was swiping at the riders, but that effect broke years ago and it’s said it would require major work to tear the ride apart and fix it.   It hasn’t been fixed up until now because they couldn’t shut down the popular ride for repairs until another big attraction was brought it to offset the traffic.(enter Pandora)  to “correct” the issue they added a, now not so temporary fix, with a strobe light on the creature as a way to “mimic” movement.

Videos have popped up on YouTube showing the ride with the fully illuminated Yeti trials.

Here’s a video from Blog Mickey

It was difficult to see the yeti when they used the strobe light.  I rode it with my daughter two times during our last trip and I couldn’t really make the creature out until our second time through.  It goes by so quickly and seeing it clearly depends on when you blink, when the strobe is on and off, and where you are when it’s visible.

I like this video because it does a slow motion version to get a better look.

What do you think of the illumination?  Do you think they will ever fix the yeti?  Comment below and tell us what you think!

On a side note.  If you ride Expedition Everest check out where the track curls up and appears to end (you pause while track switches behind you) If you look on the rocks to the right and there are all kinds of hair ties and bracelets.   Not sure why, although some people said that individuals “shoot’ them.   If you have an explanation please share in the comments. 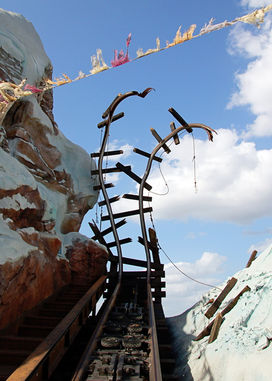 New Pirates of the Caribbean Auction Scene with Redhead Revealed From Disneyland Paris
UPDATE – Is the Mickey Mouse Great Movie Ride Refurb Based on This Abandoned Disney Concept?