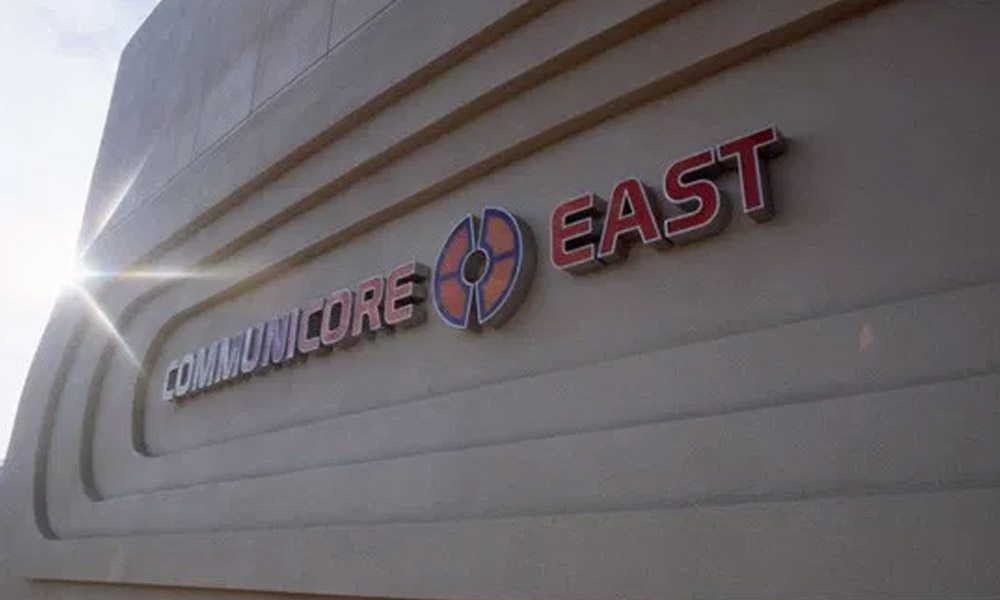 CommuniCore was a two part pavilion dedicated to technology and progress.  It was located in the two semi-circular buildings behind Spaceship Earth, which are now called Innoventions.  Opening in 1982 with Epcot, they were meant do be a “hub” and the location and appearance indicated this.  The purpose of CommuniCore was to educate the public about computers.  Back then most people didn’t have access to computers like they do today and the internet was around, but not in the capacity we know it today.

The East side of CommuniCore is the side that leads out to Test Track (formerly World of Motion), Mission Space (formerly Horizons), and the now closed Wonders of Life and Universe of Energy. 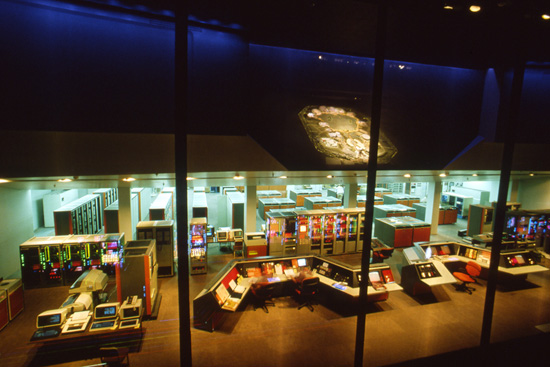 The “main” attraction of Communicore East was called Epcot Computer Central.  This area controlled almost everything throughout the park.  The original version was called the Astuter Computer Revue, and even had a Sherman Brothers song called The Computer Song.  But, this version only lasted from the October 1, 1982 opening until 1984 when it was revamped and renamed Backstage Magic.

Take a listen to The Computer Song (From WDWFacts on Youtube)

Backstage Magic ran from 1984 until 1993.  It featured a computer operator named Julie and her sidekick I/O (Input/Output.)  This show was used to demonstrate how the park’s audio-animatronics work.  I/O was a dancing ball of energy (kind of reminds me of “bits” from Tron that can do more than say “yes” and “no.”) 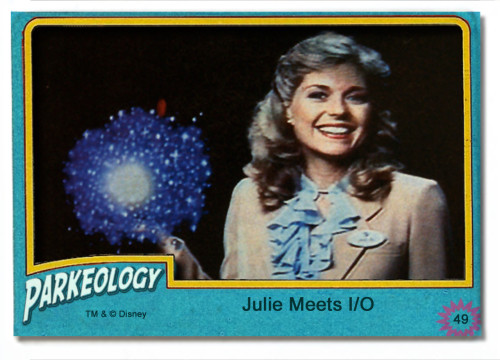 Besides Julie and I/O there were several other attractions in the Backstage Magic area including:

SMRT-1 was a voice activated robot that would play guessing games with guests.  Yes, it was really cute!  It always reminded me the 1980’s Alphie toy, but cuter. 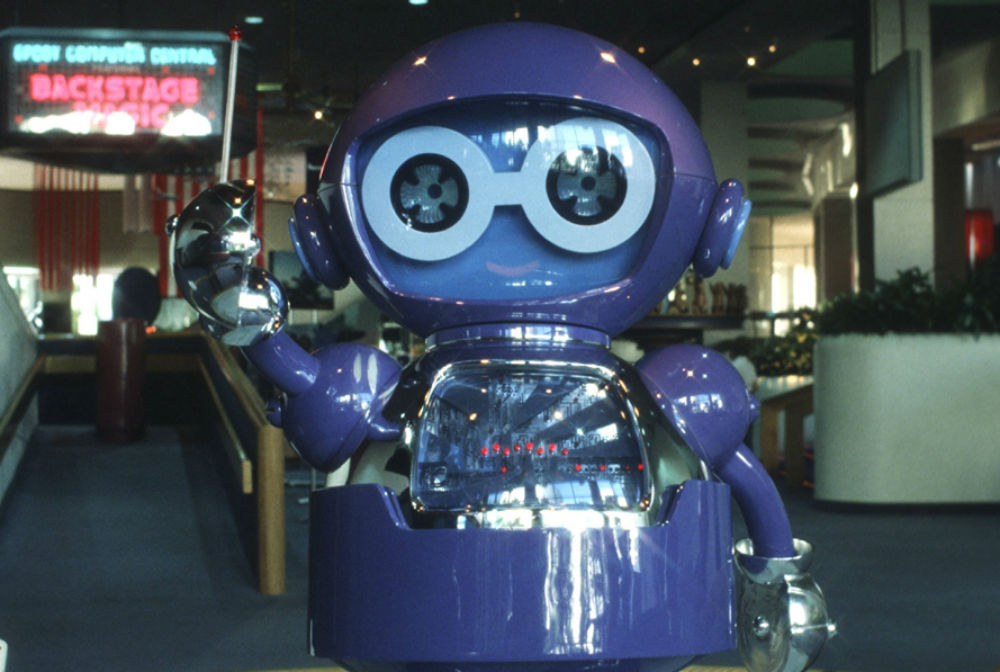 This attraction featured an interactive quiz game where six different multiple-choice “quizes” you can take by using touch screens. The categories included: The Population Clock, School Days, The 50 States, On the Farm, Home Sweet Home, and Communication Line. 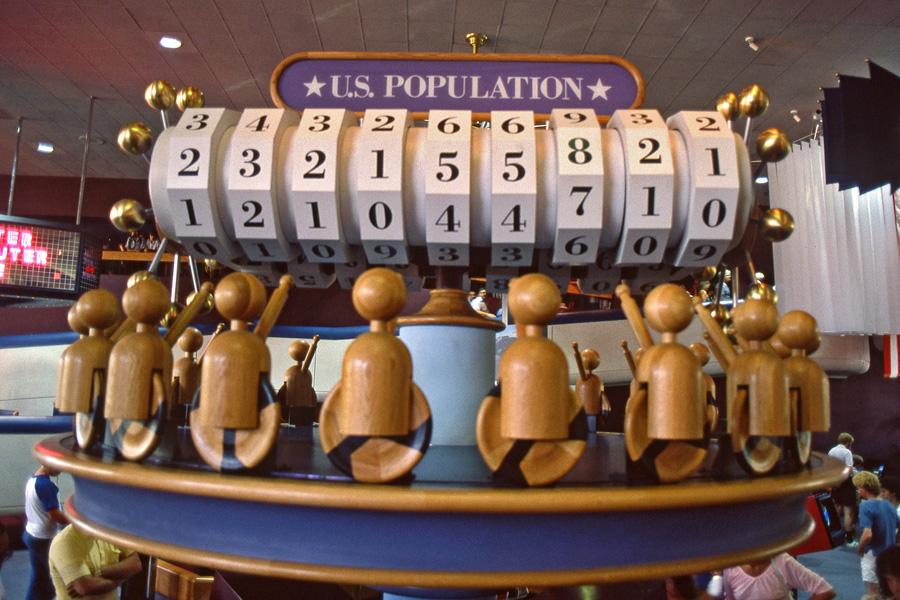 This game allowed guests to use their fingers and “slide” luggage and passengers from a conveyor belt onto “airplanes.”

Guests would use computers to put together parts of different American flags.  When one was completed correctly, graphics, like Mickey Mouse, appeared on the screen.

This game, hosted by a beaver in a hard hat, allowed guests to take 3-D pieces and assemble their own roller coaster.   Once assembled, guests could then take a first person viewpoint and ride the coaster they designed.  Later, it was kind of brought back with The Sum of All Thrills, but that too closed down.  Rumors do suggest it might re-open, but so far that hasn’t happened.

Another Area of CommuniCore East was Travelport (Sponsored by American Express.)  Travelport was a place where guests could look at slide-shows of different vacation destinations by utilizing touch-screens in booths called “vacation stations.” It closed April 27, 1992. 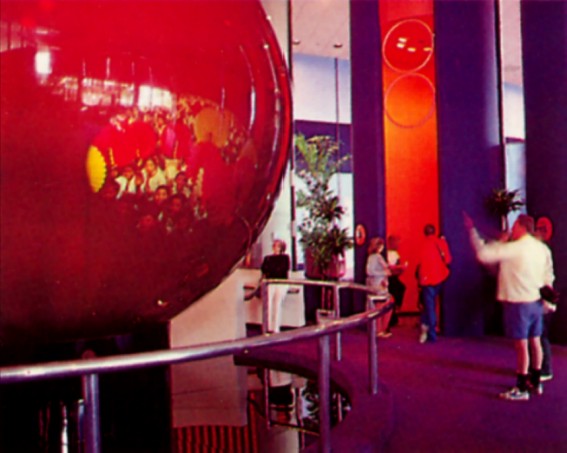 Yet another section was called the Electronic Forum.  This was the central news area of the pavilion.  Here guests could watch television screens and participate in “Future Choice Theater.”  At Future Choice Theater a host would ask questions about worldwide topics.  Guests could answer by using consoles built into the armrests of the chairs. 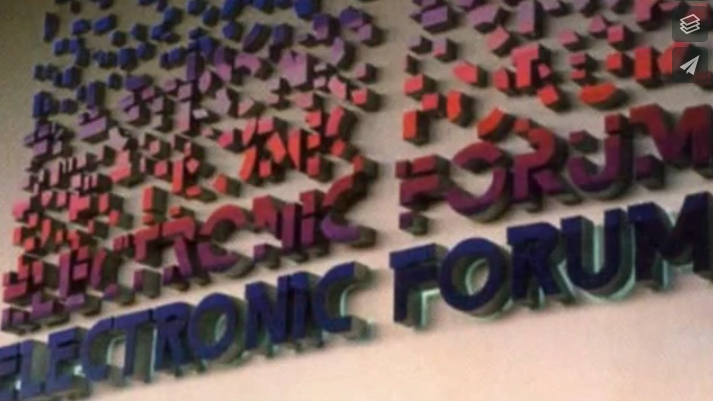 In addition to the Future Choice Theater in the Electronic Forum, there was something called “News Choice Theater.”  The News Choice Theater was sunken down into the rounded area in the foyer.  Three hanging television banks broadcasted news, sports, weather, and Disney resort and park news.

Energy Exchange was a section sponsored by Exxon.  It was down a ramp past a piece with moving gears called “Energy in Motion.”  There guests could interact with different displays and activities.  It shut down in 1994. 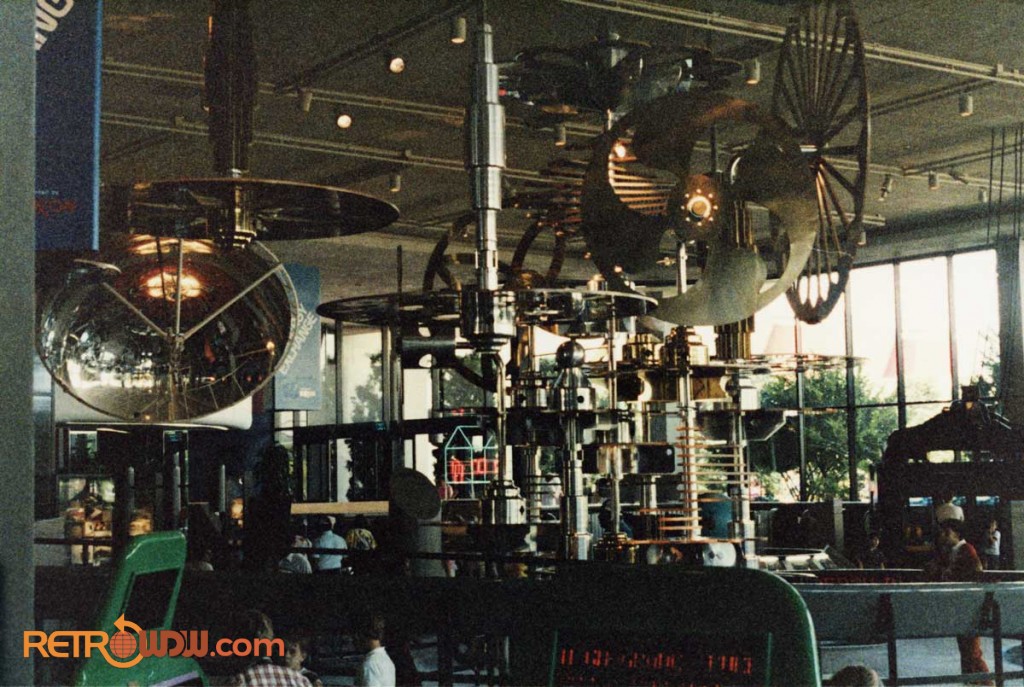 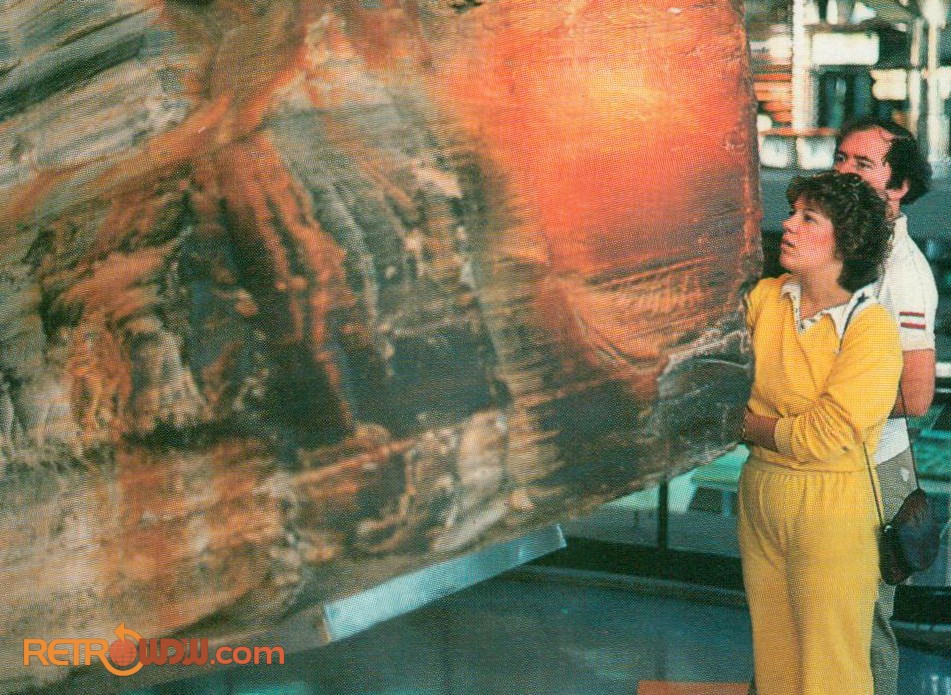 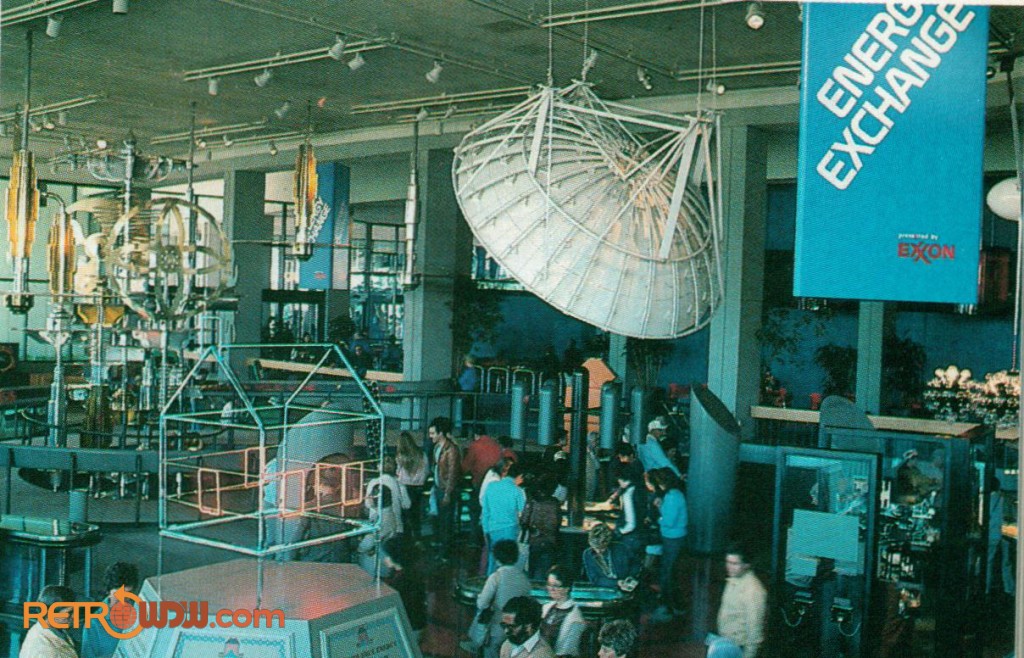 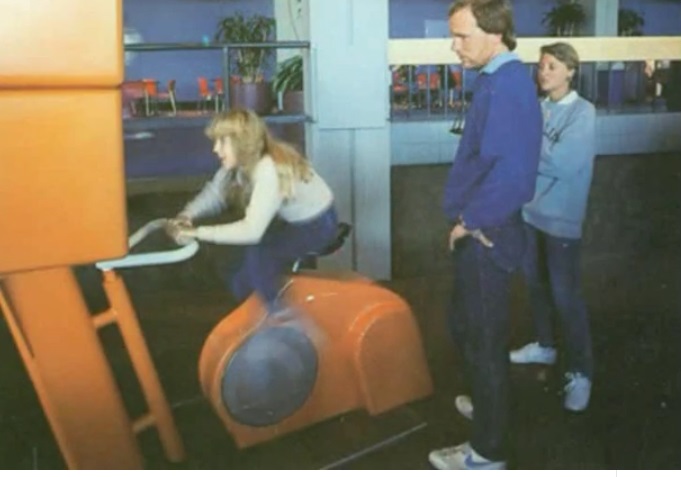 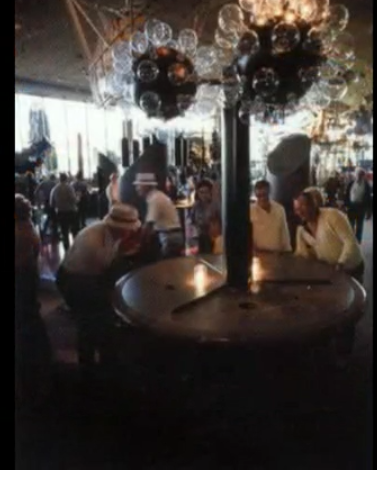 Besides the edutainment displays there were restaurants and shops in CommuniCore East.

Stargate (now the Electric Umbrella) was the restaurant there from 1982 until 1994.  It served breakfast, lunch and dinner.   Near Stargate was a snack type station called Beverage Base where guests could purchase fruit, popcorn, desserts, and beverages. 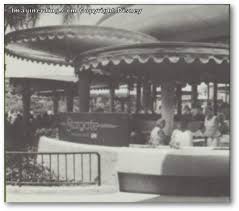 For shops there was a large two story one called Centorium.   It was there from 1982 until 1999, when it was replaced with Mouse Gears.  I remember going upstairs to shop in this store because I loved looking at the Disney art. 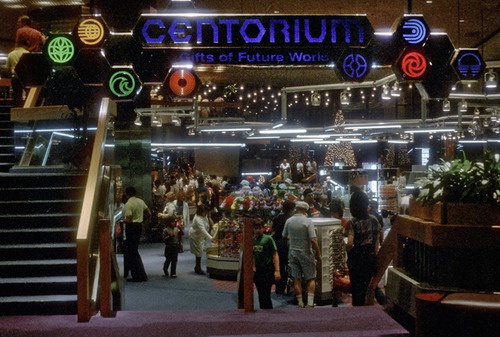 Level 1 was where you could buy Disney and Epcot merchanside.  Stuffed animals, jewelry, t-shirts, etc.  Like what you see at Mouse Gears today.

You could take stairs or a glass elevator to Level 2.  There you could buy electronics, models, and Disney art.

Communicore was closed in 1994 and turned into Innoventions. 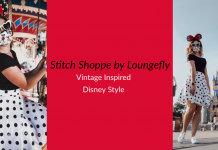