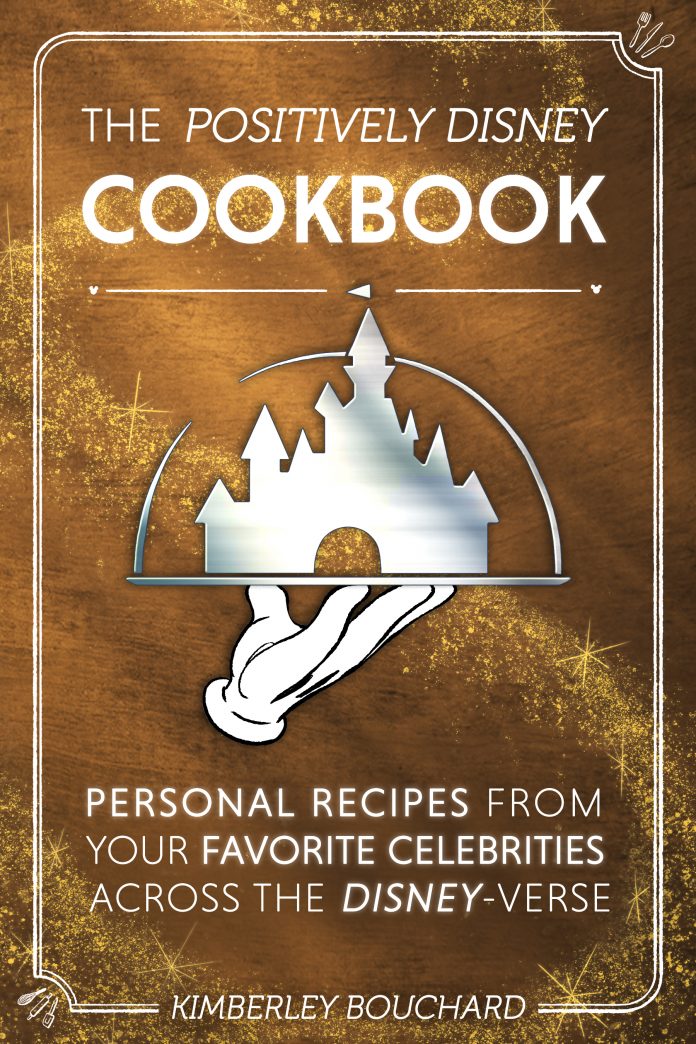 As you Insiders may recall, earlier this year I was able to interview the wonderful Mrs. Kimberley Bouchard, author of the “Positively Disney” book series. In my previous interview with her she had mentioned that she had a very special project that would be released later this year that was separate from her usual book series. It was all very mysterious and secret, but now her new project has finally been released and I had the absolute pleasure of being able to interview her once again and ask her some questions about her new “The Positively Disney Cookbook”!

Personally when I heard her next project that she has been working on was a cookbook it was not what I had expected, but being a foodie I am just so excited! Her new cookbook is a collection of personal recipes and anecdotes from the actors, animators, artists, characters, directors, Imagineers, and voices from across the Disney universe! Over 100 delicious recipes fill this book from the following:

So how exactly did she go from her “Positively Disney” books filled with inspirational stories to this project? Kimberley shares, “The idea for the cookbook came to me in April 2021. I had been cooking and baking a lot this year and that got me thinking about what others were making. This led me to wonder what the Disney celebrities were cooking and making whom I was writing about. It organically grew into the cookbook knowing so many American families were in need, which prompted me to try to help in some way, shape or form.”

We would imagine that collecting over 100 recipes would be a bit of a challenge, but for Kimberley it was actually fairly easy. She merely reached out to the people she knew, some agents and that was basically it. Pretty much everyone was on board with this, and they all loved the project. As easy as it was in collecting the recipes from everyone, the project did come with its own set of challenges. Kim states, “As far as any challenges in creating the cookbook, let’s just say that everything was a challenge except for collecting the recipes. Writing a  cookbook is very, very different from writing the ‘Positively Disney’ series. There are a lot of rules for cookbooks too. Choosing the interior layout (I had 4 artists working on different designs), manufacturing, shipping, dealing with paper shortages and staffing schedules was interesting. But it was all worth it at the end!”

I can 100% agree with Kim that going through all the challenges was worth it as she has created a new and amazing book that is filled with a collection of wonderful and magical recipes all relating back to our favorite topic…Disney! Along with the challenges came a lot of fun as well. Kim stated that her favorite part of creating “The Positively Disney Cookbook” was reading the stories behind the meaning of the recipes. She shared that it was so fun to know the history of a particular celebrity’s dish. If you want all the good details and side notes, you’ll have a ton of a fun reading through this cookbook!

There are actually two versions of this cookbook available for sale: The Regular Edition and the Limited Collector’s Edition. When I asked Kim what the difference is between the two editions she explained, “The Limited Collector’s edition is just that. There were a certain number of copies printed and that will be it. The cover is foil stamped and embossed and each book is individually sealed. The regular edition will have unlimited availability and it has a glossy cover. Both are color interiors and retail on Amazon for $34.95 and $29.95 respectively.”

And there being two different editions isn’t the only part of what makes “The Positively Disney Cookbook” extremely special. 50% of proceeds are going to the charity Feeding America to help feed American families. I asked Kim how and why she chose this specific non-profit to donate to and she explained, “I decided to donate 50% of proceeds to the charity Feeding America and I am officially working with them to help fight hunger and feed the American families in our own backyards.” This is a purely amazing way to help donate and it’s yet another reason as to why I admire Kimberley so much!

Looking through the recipes is so much fun and I can only imagine how hard it is to choose a favorite one. Not even knowing which recipe I would start with, I of course had to ask Kim if she has a favorite recipe from her cookbook. She states, “Asking for my personal top favorite recipes from the cookbook is like asking who is your favorite child. I have just now managed to start making some and have made, I believe around 15 of them. What I can tell you is that many surprised me and surpassed my initial idea about how they would taste. When my mom received her cookbook, she told me that she might just start cooking again! They are all very enticing!” Fair enough!

This new cookbook came out just in time for the holidays. It’s an absolutely perfect gift for any Disney lover (or even for yourself), especially if they love to cook. And don’t forget the proceeds go to a good cause, so it’s two gifts in one! If you are interested in purchasing “The Positively Disney Cookbook” you can buy your copy on Amazon here!

Kim of course is always busy writing away, so I asked her what other future projects she has in the works that we can all get excited about. She shared that book 6 of the “Positively Disney” book series will be out next year, as well as a second run of the “Positively Disney Star Wars” edition will be out in time for Star Wars Celebration in Anaheim, California. And if you are just as excited about her new cookbook as I am you will be excited to know that Kimberley is mulling over a second cookbook for 2023! We are so excited to celebrate this exciting time for Kim and we are already eagerly anticipating her next two books that will be out next year!