Welp, the dinosaur is out of the paddock… Jurassic World VelociCoaster will open in 2021! Now that you know what we’re up to over in Jurassic Park at Universal’s Islands of Adventure, we want to bring you the story of it all through the voices of the minds behind it. We’re taking you behind-the-hunt with a series of articles that will share an in-depth look at all the work that has happened (and is happening) to bring a new species of rollercoaster to life at Universal Orlando Resort.

First up, every dinosaur needs a place to call its own, and Blue, Tango, and Sierra are no different. I had a great (virtual) meeting back in April of 2020 with Annie Cantele, assistant project manager in Universal Creative,  and T.J. Mannarino, the vice president for Entertainment Art Design, who worked to bring the new Raptor Encounter experience to fruition.

KATIE: Before we get started, could you both tell me a little about yourselves and how you came to be at Universal?

TJ: I was a Navy brat, so I traveled around a lot. That got me into a very comfortable situation of meeting people and getting the chance to know and experience different things, which set me up perfectly for entertainment. I started off in film and TV, and at the same time I had a hobby that I never thought would become a career, which was doing haunted houses. So in 1996, Universal hired me to be the designer for Halloween Horror Nights, and now 25 years later, I’m still here and still involved in Halloween. My team and I handle all of the creative development design and costume and makeup development for all entertainment live productions, anything from holidays and Mardi Gras, to things like The Bourne Stuntacular and Raptor Encounter.

ANNIE: I grew up in upstate New York and I’m a twin. My brother, Conor, is still living in New York with my parents due to his autism. He is actually a big part of why I ended up where I am. We were both involved in theater in high school and growing up we’d go to theme parks all the time. It really made an impact on me how in theme parks there are experiences that are so important not only to average guests, but to individuals with disabilities like my brother. We create these immersive experiences that even the playing field. I wanted to be a part of that growing up. I got a dual bachelor’s in innovative design and industrial & management engineering and eventually came to Universal Creative in June of 2018.

KATIE: At that point VelociCoaster was already moving, right? Were you put on that team right at the beginning of your time at Universal, Annie?

ANNIE: I have been with VelociCoaster since I started in 2018, but my role has changed three times! I’m currently the assistant project manager, helping to manage project scope, schedule, and budget, as well as working with stakeholders all over the park to make sure we deliver an excellent product for both the park and our guests. My main focus lately has been Raptor Encounter, though — managing the construction, theming, technology, all of that. We mostly are in charge of making sure that what we turn out at the end wows our guests and exceeds the expectations that they have.

KATIE: What about you, TJ? What has your Jurassic involvement been like?

TJ: One of the first projects I worked on with Universal was a big display walkthrough experience based on supporting the film launch of Lost World, the second film in Jurassic Park. That got me hugely involved in Jurassic itself and gave a lot of perspective into the storytelling of it. Then I was a part of the group that did the initial Raptor Encounter that we honestly thought was going to be more of a summer promotional experience! We never expected, even the first week that we opened, how much the audience would hook into this. That was really exciting, seeing how much this simple experience became such a memorable moment for anyone who either loves the brand or has never experienced it. When the VelociCoaster team reached out to us, they did so for two reasons. One to inform us that we were about to be displaced from our original location, but also that they were going to include Raptor Encounter in the whole footprint and master plan of what is happening in this part of the park. So we worked with a group of the creative team that was dealing with the storytelling of VelociCoaster on how we could tell our story in a way that matches up with theirs.

Reminder to the reader: this interview took place in April of 2020, when the parks were still closed, hence my next question being…

KATIE: What will the new Raptor Encounter experience be like?

ANNIE: We have been joking that Blue and her pack are totally getting an upgrade. When we reopen, I think guests are going to be shocked by this new home for Blue. But we’re not only giving Blue and her pack a nice new home to live in, but it also directly connects into the culture being built in the park through the show elements, the scenery — it’ll definitely tie into the story of the main coaster. I think the centerpiece of it though is really continuing to focus on the interaction between the guests and the Raptors. The new location will also feel a little bit more industrial, like in the Jurassic World series.

TJ: Which was exciting for us because the new environment has the steel beams, which has a different feel as the new film series does. This is a reminder that we want guests to have the ability to have this chance-of-a-lifetime moment and come in contact with these dangerous creatures, but only when they’re contained and with the help of a very trained and seasoned caretaker.

KATIE: How does Raptor Encounter fit into the overall experience in Jurassic Park?

TJ: I think similarly to some of the entertainment goals you see resort-wide. Universal Creative does, and continues to do, a wonderful job telling these fantastic stories that they build with high technology and ride-show equipment. And then through entertainment, we can kind of give guests this chance to experience a one-on-one interaction with the characters. For us at Raptor Encounter, these Raptors have become so phenomenally popular and now we’ve got not only Blue but the baby Raptors, Sierra and Tango.

ANNIE: Yes! The Raptors have become so popular and are really, in my mind, the centerpiece of the Jurassic World portion of the area. It’s all about Blue and how smart she is. When you’re approaching Jurassic Park, this combination of attractions is going to be right in your face. You’re going to see the outer edges of VelociCoaster and our queue and it’s just creating this energy of, “woah, there are Raptors here.”

Just oooone more reminder to the reader: this interview took place in April of 2020, when the parks were still closed, and so I asked…

KATIE: What do you think fans are going to be most excited about?

ANNIE: Well there’s definitely already a lot of energy! We haven’t announced yet and there are a lot of people who have a feeling we’re up to something. They’re super pumped to see stuff coming into Jurassic Park because it’s been a while. It does bring this really good energy that I’m really excited about.

TJ: I agree. Any time Creative touches the landscape and makes adjustments, there is a ton of buzz that happens. And I think the story behind the attractions are fascinating. These are unique creatures we’ve been following through the film series and that we’re bringing to life here in the parks. It’s a whole story that really expands. Once both Raptor Encounter and VelociCoaster open, the audience will really see this full story thread throughout. That’s fun to see from something like Raptor Encounter, which originally just started as a little project to get some live entertainment into Jurassic Park. Now it’s part of a bigger story.

KATIE: I’m not entirely sure how to phrase this, but does the storyline of Raptor Encounter change with all these changes?

TJ: It doesn’t change per se, but it does provide a tie to VelociCoaster, whereas in the past we were more of a standalone. There’s some scenery that will tie both attractions together so you can see the connection visually. At the same time, it will be very clear that the new paddock is here because we are trying to train the Raptors to deal with the various elements of the park and that story continues to some degree in VelociCoaster.

KATIE: What is the appeal of Jurassic Park?

ANNIE: I was going to say, it’s scary!

TJ: Why do people go to Halloween Horror Nights? It’s a fascinating thing! Thrill rides in general. I think that aspect of these creatures, there’s a sense of danger and not being sure what’s going to happen next. I think the whole way people interact with Jurassic Park just makes it fun, exciting, and a little bit suspenseful.

ANNIE: I like to call it a comfortable danger, because our guests come into Jurassic Park knowing that there are dinosaurs present and it does give them that uneasy feeling. But they know they’re not going to end up like the first visitors to the original Jurassic Park, they’re safe in our environment. But it does still give them that uneasy feeling.

ANNIE: If I wanted people to know anything about my role it is that we are just as excited for everybody else to see all this finished and released. I’m definitely going to be super creepy the day Raptor Encounter opens and stand out in front and watch people go in and out!

TJ: That’s a thing I feel very strongly about — everybody that I come in contact with is just as much a fan geek as the audiences are that we build this stuff for. If I wasn’t in this job, I’d be on the other side doing everything the fans are doing and trying to figure out what’s going on. The people that are in charge of these projects and create them have passion, and love, and are going to take every effort and all the time they have to get it right because it’s just as important to them as it is to the fans.

Join us soon to check out the new Raptor Encounter and don’t forget to sign up for all updates on Jurassic World VelociCoaster.

This content was originally published on November 10, 2020 10:00 am on the official Universal Orlando Resort Blog. The Kingdom Insider takes no responsibility for errors in syndicated content. 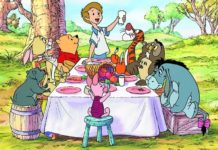