Foodie news is coming your way because I’ve got the latest and greatest going on at both Disneyland Resort and Walt Disney World Resort. Some of these are sweet, some are savory, but there’s one thing for certain about them all – they’re delicious.

From the new BBQ classics coming to Paradise Garden Grill to some adorable, sweet treats making their way to multiple resorts at Walt Disney World, this summer there are tons of spots just waiting for you and your tastebuds to explore. If you’re ready, let’s give your stomach something to look forward to, shall we?

At Disneyland Resort, you’ll find some mouthwatering dishes and sips over at Paradise Garden Grill nestled within Disney California Adventure park. Here, you can now enjoy some BBQ delights added to the menu. The Kansas City-style BBQ Ribs has pork ribs with house-made BBQ sauce, pickles, and onions and the North Carolina-style BBQ Pulled Pork Sandwich has creamy coleslaw, crispy jalapeños, pickles, and onions. The St. Louis-style BBQ-Rubbed Chicken is a beer-brined, roasted half chicken with pickles, and onions. All of these options come with your choice of side – the Poblano Mac & Cheese, Chuck Wagon Beans, Potato Salad with Bacon, Creamy Coleslaw, Andouille Sausage, or the Jalapeño-cheddar Cornbread.

For beverages try the Peach Cobbler Cocktail with moonshine, peach schnapps, and peach-cinnamon purée or the Pabst Blue Ribbon Beer.

If you want a little of everything, then the Family Picnic Platter is for you. This has a BBQ half chicken, pulled pork, ribs, andouille sausage, poblano mac & cheese, chuck wagon beans, potato salad with bacon, creamy coleslaw, jalapeño-cheddar cornbread, pickles, and onions. To top it off, it is also served with cherry cheesecake. Now that’s a meal!

Red Rose Taverne at Disneyland park will be featuring a new Late Night Menu with some tasty eats to enjoy. The plant-based Bonsoir Chili Cheese Poutine includes a hearty plant-based chili, shredded “cheese,” and seasoned waffle fries while Our Classic Poutine dish has slow-cooked beef, gravy, cheese curds, and spiced, pickled red onions on waffle fries – yum! Lastly, the Firelight Fries features tangy spiced chicken and pepperoncini ranch sauce on ranch-seasoned waffle fries. This yummy Late Night Menu is currently available from 8:30 p.m. until 11:30 p.m. daily. You can pick up all of these through Mobile Ordering on the Disneyland app, too!

Also at Disneyland park, Harbour Galley has some treats for you. You can treat yourself to Soup in a Sourdough Bread Bowl with your choice of clam chowder, steak gumbo, or the plant-based vegetable gumbo. If soup isn’t your thing, there’s also the new Harbour Muffuletta Salad with cured meats and cheese on mixed lettuce with olive tapenade, giardiniera, pepperoncini, and Italian dressing with sliced sourdough. Now that’s a tasty salad. For those looking for a satisfying sip, the Pelican Punch is a chilled tropical blend of pineapple, coconut, and lime.

These aren’t the only updates to New Orleans Square because Royal Street Veranda also has some new dishes recently added to the menu. For those looking for a plant-based option, the Hoppin’ John IMPOSSIBLE Royal Wrap has seasoned plant-based meat with rice, black-eyed peas, “cheddar,” lettuce, and Cajun dressing in a spinach tortilla. The Street Steak Salad is made up of chilled steak on mixed greens, cherry tomatoes, blue cheese, candied pecans, and fried onions with a horseradish dressing. For a delightful finish or a little pick-me-up for those with a sweet tooth, the Blueberry Fritters with blue sugar and lemon curd dipping sauce is for you!

Do you love ice cream? If so, Salt & Straw at both Downtown Disney District at Disneyland Resort and Disney Springs at Walt Disney World Resort have some truly unique flavors for the month of June inspired by summer – the Picnic Series. This menu is embracing the season and highlighting picnic-themed flavors inspired by popular summertime eats such as watermelon, fried chicken, and cherry pie. Be sure to stop in throughout the month at both locations to try out this special menu.

At Disney Springs, there’s another frozen treat to enjoy, and this one is themed for none other than Buzz Lightyear himself. At Swirls on the Water is the Buzz Lightyear Star Commander Cone, a purple cheesecake soft-serve adorned with chocolate wings and space sprinkles. This special intergalactic treat is available through the end of the month. Also, at this location this month is the DOLE Whip Float featuring Rosa Regale Sparkling Red Wine, DOLE Whip strawberry, and a fresh strawberry slice. That’s one refreshing treat!

Disney Springs isn’t the only place with some space sweets on the menu. At Magic Kingdom Park, join in on galactic celebrations for everyone’s favorite space ranger with this special treat inspired by his new film “Lightyear.” The new Zurg Freeze can be found at Auntie Gravity’s Galactic Goodies starting tomorrow and is available through the end of June. It’s the perfect treat to reward yourself for a successful mission on Buzz Lightyear’s Space Ranger Spin!

EPCOT also has some exciting delights to indulge in. Over at The Land, two locations are getting a few new dishes – Garden Grill and Sunshine Seasons. A tasty Barbecued-roasted Chicken with Sweet and Tangy Barbecue Sauce as well as a Southern-style Spoon Bread is now available at Garden Grill. At Sunshine Seasons starting today, you can enjoy a Roast Beef Sandwich with chilled roast beef, chimichurri aïoli, cheddar, arugula, and red onion on a flour-topped kaiser roll served with potato chips. For a plant-based option, try the Mediterranean Vegetable Sandwich featuring roasted red pepper, red onion, tomato, arugula, hummus, and balsamic vinaigrette on herbed focaccia. And rounding up the new additions to this tasty spot is the Spicy Fish Taco. This dish has a fire-roasted corn salsa, creamy jalapeño Piri Piri sauce, and radish served with plantain chips – yummy!

Coral Reef Restaurant has also seen some enhanced items recently. Start off your meal with new appetizers like the Trio of Seasonal Dips with fresh vegetable crudité and crisps or the New England Clam Chowder. As you enjoy the incredible, underwater views, feast upon entrée additions like the Orange-glazed Sustainable Salmon served with vegetable stir-fry and shiitake sticky rice. If this doesn’t quite float your boat, consider the Cajun Chicken Pasta filled with pulled Cajun-spiced chicken, parmesan cream sauce, roasted mushrooms, peas, peppers, and onions. I don’t know about you, but these all sound quite tasty to me.

I hope your appetite is ready because Hollywood & Vine at Disney’s Hollywood Studios will be welcoming back their buffet on August 28. As you get to meet some of your favorite Disney Junior pals for breakfast and Minnie and her friends for lunch and dinner, you’ll be able to feast upon all-you-care-to-enjoy delights. For breakfast, this spot will be serving up options like Brioche French Toast with Banana Foster Sauce, Salmon and Bagel Casserole, and Plant-based Frittata with tomato jam. As the day goes on and Minnie and the gang come out to play, the buffet will switch over to tons of yummy plates, including the Plant-based Roasted Mushroom Farro Risotto, Slow-roasted Crispy Pork Belly with Guava glaze, and Shrimp and Bacon Mac & Cheese. And to perfectly finish off your meal, there are plenty of desserts to choose from, such as the Mississippi Mud Pie or the PB&J Tarts. You’ll want to have it all!

Mama Melrose’s Ristorante Italiano is debuting new menu items inspired by classic Italian cuisine in late June. For starters, the Fried Fresh Mozzarella is a must-try with marinara sauce, ricotta salata, and lemon oil, while the Grilled Bone-in Pork Chop entrée can’t be missed. This dish is accompanied by creamy polenta, roasted tomatoes, mustard vincotto, and charred broccolini. You can also indulge in enhanced versions of Mama’s Italian Pasta and the Sustainable Fish dish. For a grand finale, there are several new eats to choose from – the Mini Cannoli Trio, Colors of Italy Cheesecake, Mama’s Cookies To Go, and Blueberry Frangipane Tart. Now that’s a well-rounded dessert menu.

Calling all brunch lovers! I’ve got some exciting news coming to you from Disney’s Old Key West Resort. Olivia’s brunch service will be available every day of the week starting on September 1, with reservations opening soon. Yes, you heard that right – every single day. This expanded offering will still feature your favorite classic brunch items, like the Southernmost Buttermilk Fried Chicken and the Papa’s Hash. And what proper brunch is complete without a good ole Loaded Key West Bloody Mary? But don’t worry, there will also be a new offering added to the menu – Banana Bread Pudding. This tasty treat features Bahamian banana-rum syrup and coconut whipped cream with your choice of bacon, sausage, or ham, and is sure to give you those sought-after island vibes.

If you’ve got a sweet tooth, you’re in luck because there are several resorts across Walt Disney World that have some new treats for you. At the World Premiere Food Court at Disney’s All-Star Movies Resort, you’ll find the Box Office Cupcake, a yellow cupcake filled with caramel and topped with marshmallow buttercream and a peanut-pretzel-popcorn brittle – it’s all your movie theater favorites rolled into one! Intermission Food Court at Disney’s All-Star Music Resort has the Rock and Roll Cupcake, another yellow cupcake but this one is filled with peanut butter buttercream and topped with banana panna cotta and candied bacon. Yes, yes, and yes! The End Zone Food Court at Disney’s All-Star Sports is serving up the MVP Cupcake. This yellow cupcake is stuffed with apple pie filling and topped with a buttercream baseball and caramel popcorn-peanut crunch. Now that’s a homerun cupcake!

Disney’s Pop Century Resort also has a couple of new sweets for you. At Everything POP Shopping & Dining, the pastry chefs have whipped up the Flashback Crème Pie, an oatmeal-raisin cookie sandwich filled with marshmallow crème topped with dark chocolate and cinnamon glaze, as well as the Pop Goes the Bananas Cupcake, a yellow cupcake filled with caramelized banana in a pastry crème topped with caramel-latte buttercream. These two are not to be missed.

Take a trip into the animated world of some of your favorite Disney stories at Disney’s Art of Animation Resort, where they’ve got some delights for you too. At Landscape of Flavors, try the Lighting McQueen Gravel Road Sundae featuring vanilla soft-serve ice cream with chocolate cookie crumbs, chocolate sauce, and a Lightning McQueen chocolate coin. This one will leave you saying “ka-chow!”

At The Drop Off pool bar, enjoy the sunshine and a cocktail with two of their delicious concoctions. The Big Blue Ocean is made up of Svedka Vodka, Bacardi Superior Rum, Bols Blue Curaçao, and Minute Maid Premium Lemonade served with a souvenir glow cube. The Seafoam Refresher has Malibu Coconut Rum, Bols Blue Curaçao, and pineapple juice, garnished with pineapple. Talk about refreshing!

There you have it – all the latest foodie news happening on both coasts. Which are you most excited to try? 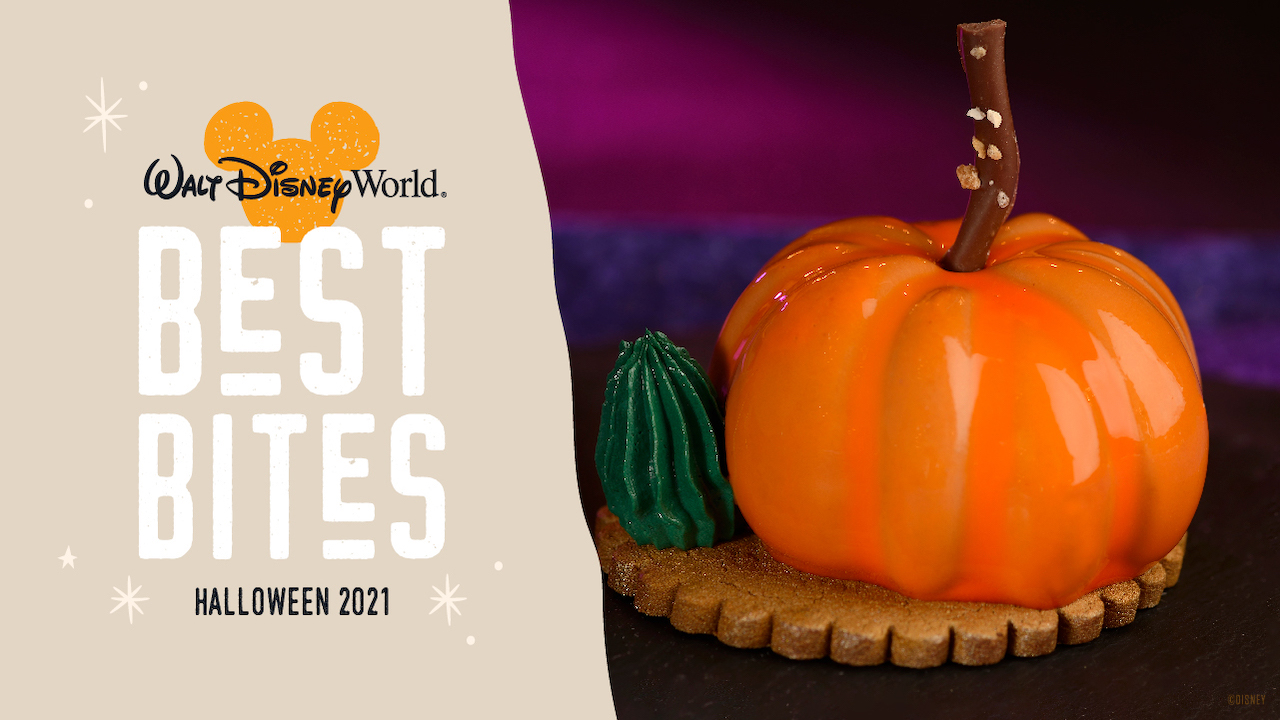