Inside the Magic just posted an interview video they did with  Disney Portfolio Creative Executive Scott Trowbridge from Imagineering.  This is the largest expansion they have undertaken to either Disneyland or Walt Disney World and it will be immersive.

This confirms what we have been hearing about.  When we talked to cast members on our last trip, they were excited about the upcoming Star Wars Land and mentioned that on the Falcon ride how you fly will determine how you are interacted with later.  They also talked about Credits.  We get clarification that they will be Galactic Credits.  This will be how guests are “tracked” to monitor your progress.  Trowbridge said:

You will be given the opportunity to make choices and choices matter and have consequences…If you do a great job flying the Falcon you might get a few extra Galactic Credits coming your way, but if you bang the ship up and bring it back all damaged boss man might not be too happy about that and when you roll across the street to the local cantina, that maybe there is a bounty on your head because you owe more money than you have…so it is a place for those that want to participate there is an invitation in various ways to be a deeper part of the story. 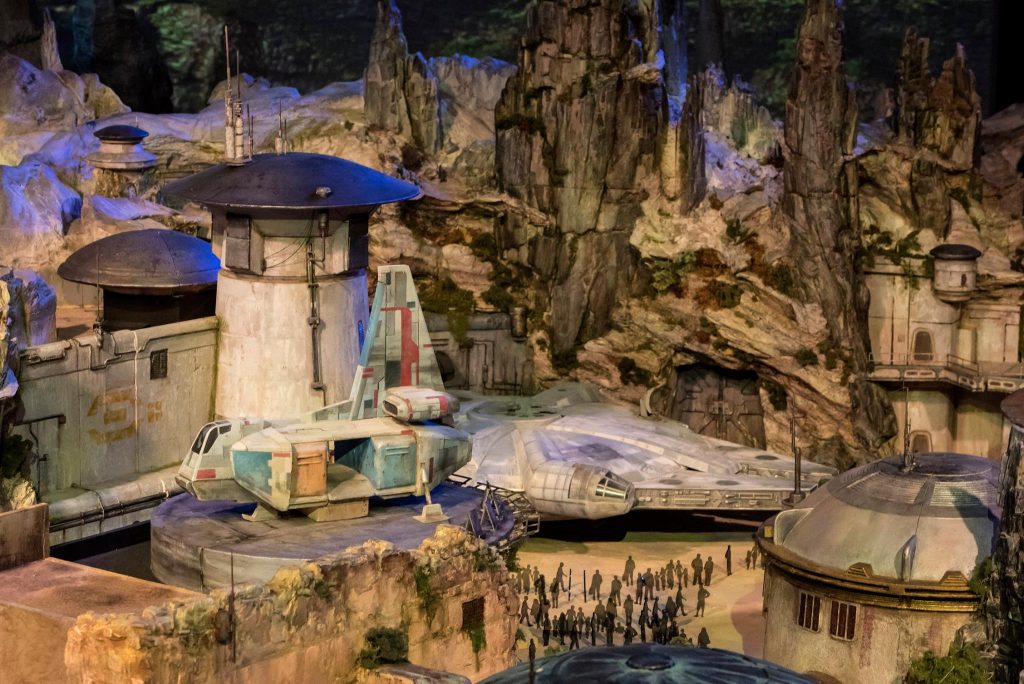 Trowbridge even discussed how they want to increase levels of guest participation.

Those familiar with some of the work that Imagineering has been doing over the past couple of years, including some of the research and development work we’ve been doing, might be aware that we’ve been thinking about how do we actually bring this more participatory form of experience to life. And we have done some play tests in the past, and we have done some experiments in the past, prototypes – one probably wouldn’t be too surprised to find out that we’ve taken a lot of that thinking and put it into this project…..

He went on to describe the upcoming addition and how they are trying to invite guests to immerse themselves in the experience.

One of the things we wanted to make sure we did was to create a place that allowed our guests to discover and participate in their own Star Wars story.  So that meant not just recreating a fan favorite place like a Tatooine or Hoth.  Those are great places and we know what happened there, but we know we aren’t in those stories.  So that led us to the idea of building this planet.  A place that is well known to folks inside the Star Wars Universe, although we may be discovering it for the first time, but it’s a place that provides lots of opportunities for exploration.  Lots of opportunities for us to discover and start to participate in our own Star Wars adventure.  It is a very vibrant trading port so you should expect to find lots of Star Wars characters here some we may be very familiar with and some we may be meeting for the first time……Is it interactive?  Yes.  Is it participatory?  Yes.

But he did mention that isn’t mandatory to participate.  If you just want to stroll around and look and shop that is fine.  It sounds amazing to me!

Check out the video of their interview

What do you think about the Galactic Credit system?  Are you excited about immersion?  Comment below and let us know what you think!