The art of storytelling, something Disney has perfected, is not lost on its latest creation, The Gran Destino Tower at The Coronado Springs Resort. The story behind the new tower is 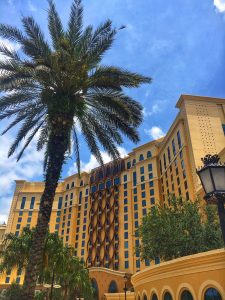 based on the 7-minute film started by Salvador Dali and Walt Disney in the 1940s and finished in 2003 under the guidance of Roy E. Disney, Walt’s nephew. Celebrating the rich cultures and vibrant landscapes of Spain, Mexico and the American Southwest through contemporary design and Old World traditions, The Gran Destino Tower shines as it rises above the entire resort.

The tower offers 545 modern guest rooms (including 50 suites and club-level services), a grand two-story lobby, new meeting venues, and a rooftop restaurant and lounge with spectacular views. The tower is now the breathtaking gateway to the re-imagined 2,385-room resort. 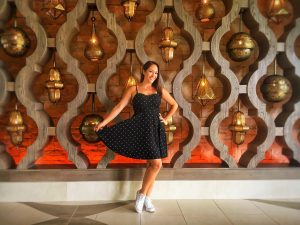 The two story lobby of the Gran Destino is among the most architecturally beautiful lobbies I have ever seen. After passing through it’s grand entrance, guests are submersed in the cultures of Spain combined with nods to Dali and Disney. On their way to check in, new guests pass intricate wooden screens with rows of beautiful Moorish hanging lanterns, while decorative bronze screens inspired by Spanish tile patterns accent the rear wall of the lobby. It’s as if the Imagineers new, this would be the latest wall in the emerging trend on social media, “Walls of Disney.”

The warm colors and patterns of Barcelona inspire the sun-filled Barcelona Lounge on the lobby’s lower level, offering plenty of casual seating and lake views. Beneath a magnificent chandelier framed by sculpted plaster columns, guests can enjoy coffee in the morning and cocktails as the day progresses. Barcelona Lounge serves as a great meeting point for large parties, and corporate events. 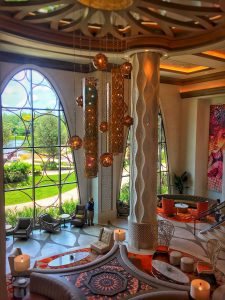 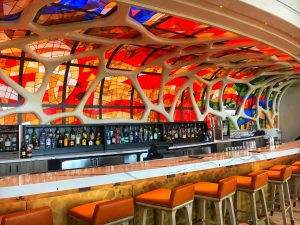 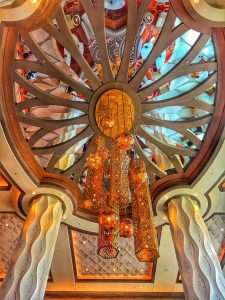 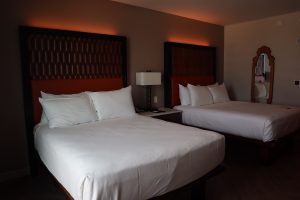 Disney has said that the Gran Destino Tower is under their moderate hotel categoy, but there is nothing moderate about the rooms. In fact, they are some of the most luxurious rooms I have ever seen. Imagineers, keeping in theme, incorporate warm color palettes, Spanish tile, and sleek non-carpeted floors combined with the latest hotel room technology for Disney’s guests. Each tower guest room also offers a new interactive television system that provides a more customized and Disney differentiated in-room experience. This new television system will enhance the guest experience with Disney-quality services, content and personalization. For example, guests can view their Disney PhotoPass images on the large screen and stream their entertainment services from their personal devices to the in-room television. 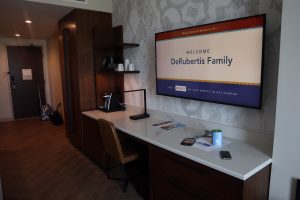 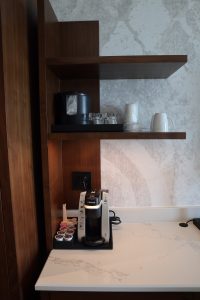 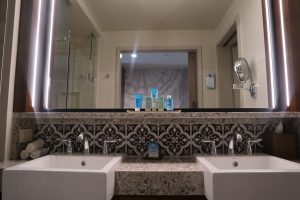 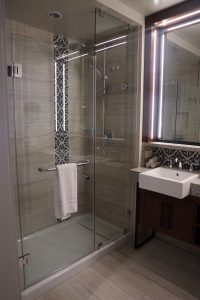 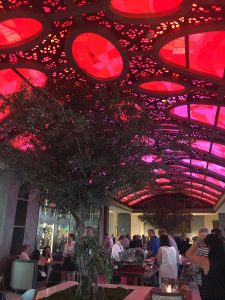 Gran Destino Tower is crowned by dramatic rooftop dining locations, Tolédo – Tapas, Steak & Seafood and Dahlia Lounge, offering breathtaking views of Walt Disney World from the tower’s 16th floor. Named for the storied Spanish city home to avant-garde writers and artists of the 1920s and ’30s, Tolédo – Tapas, Steak & Seafood is a table-service dining experience. The moment I walked in and noticed the ambiance and its views, I thought, “Finally, there is another option if guests are looking for something other than California Grill, but want beautiful décor and views.”

The adjacent Dahlia Lounge takes its mesmerizing shapes and swirling patterns from Spanish Modernism, inviting guests into an intimate, artful space where they can enjoy signature cocktails and panoramic views. Here, you will find walls adorned with pictures of Disney and Dali through the years and you’ll understand a little more about their friendship and the project they were working on. 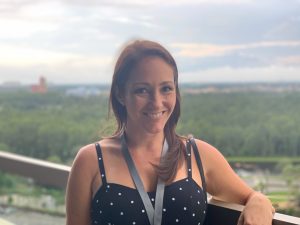 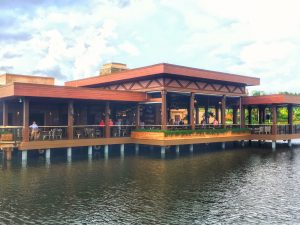 The tower is not the only new addition to the resort. As part of the broader re-imagining of Disney’s Coronado Springs Resort, three new pedestrian bridges now extend across Lago Dorado, allowing for quick and convenient passage to and from all parts of the resort. In the middle of the lake at the nexus of these new pathways is Villa del Lago,home to a new outdoor restaurant, Three Bridges Bar & Grill. The open-air, waterfront dining location offers delicious entrees and shareables, along with refreshing cocktails and signature sangria pitchers. Three Bridges Bar & Grill features a rustic, Old World charm anchored by a large stone hearth behind the central bar. 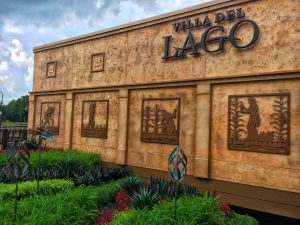 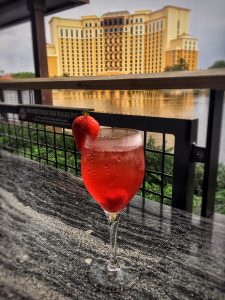 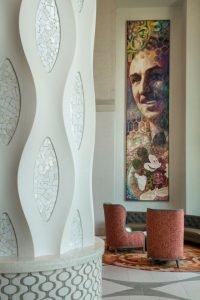 Disney’s Coronado Springs Resort is now a celebration of Spanish, Mexican and American Southwest cultures, infused with a profound respect for the natural world – most notably water. At every Disney Resort, I almost always find myself drawn to the artwork Disney Imagineers choose to hang throughout each resort. I love the map of The Polynesian Village that hangs in the lobby. At the Gran Destino Tower, it was a giant painting of Walt and Mickey that hung in their two-story lobby. It captured my heart and was a beautiful way to honor the mouse and the man that started it all.