If you’ve been to the Walt Disney World Resort lately you’ve probably seen the construction on the upcoming Skyliner. pillars and stations have been popping up around the Resort. The station at the International Gateway, near France, is especially beautiful!

Here we could see them when we visited Disney’s Hollywood Studios:

Currently most of the gondolas are covered in plastic, but every so often you will see uncovered ones pass by. Beginning next month Disney plans to start gradually removing the covers to show off the cars featuring eight different colors and 22 different character designs. 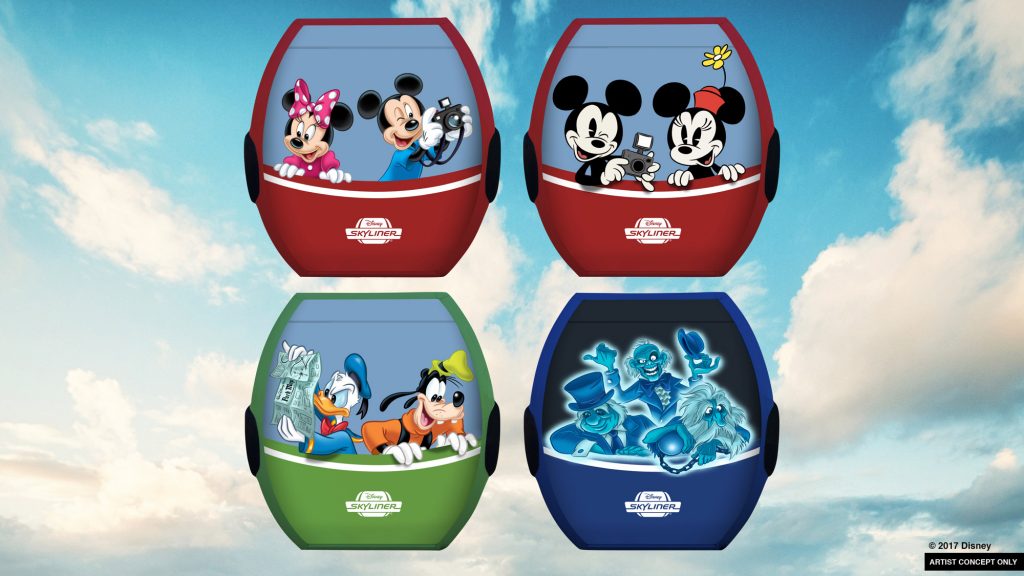 According to the Orlando Sentinel there will be about 300 gondolas that will be in service beginning this fall. The capacity will be similar to the capacity of the Monorail System.

We noticed that seemed to move rather quickly, but they apparently only go about 11 miles per hour. The trips will take approximately 15 mins and will go up to 60 feet in the air, offering amazing views of the Walt Disney World Resort. I’m so excited just thinking about it!

The Orlando Sentinel was lucky enough to get an interior view of one gondola vehicle.

Inside the vehicles are 2 wooden benches that can carry up to 10 people per vehicle.

Keep in mind there will be no air conditioning in these vehicles, but they are well ventilated and air will flow.

Employee testing for the new Skyliner could begin in August, but it will still be a while until they go into regular use. Disney is still saying something this Fall (technically Fall goes until December 21.)

Either way they are coming very soon! What do you think? Comment and let us know!