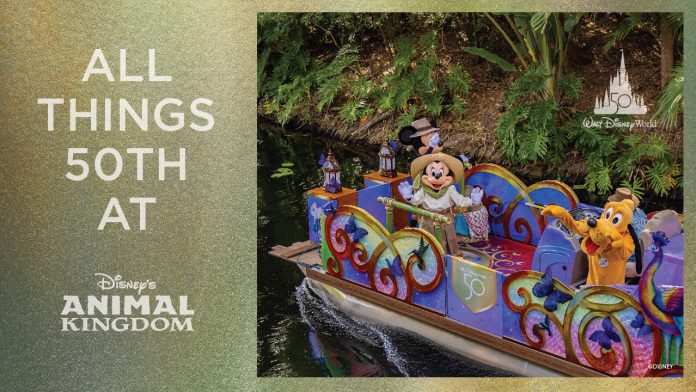 At the park’s Discovery River Theater, the magic of nature and Disney storytelling are hitting new heights with “Disney KiteTails.”  Several times a day, performers fly windcatchers and kites of all shapes and sizes, including elaborate three-dimensional kites – some 30 feet long – that allow Disney animal friends like Simba and Zazu or Baloo and King Louie to soar like never before.

Each 10-minute kite display is a gala performance of color and movement, with original, worldbeat arrangements of favorite tunes from “The Lion King” or “The Jungle Book,” filling the air in an uplifting, vibrant experience for the whole family.  Check out our earlier “Disney KiteTails” story for details.

As many readers know, each Walt Disney World Resort theme park icon is being transformed into a magnificent Beacon of Magic at night, beckoning all to come and celebrate during the 50th anniversary festivities. And at Disney’s Animal Kingdom, the Tree of Life is shining like never before!

A warm and glorious light emanates from the Tree of Life on select nights as enchanted fireflies gather to call forth the magic of nature, inviting everyone to join in the celebration. We have a peek at the magic in our original story.  The Tree of Life also continues to awaken from time to time throughout the evening, sharing its animal tales filled with whimsy and heart.

During the celebration, beautiful “Disney Fab 50 Character Collection” golden sculptures can be found throughout all four of the Resort’s parks paying homage to the past 50 years of Walt Disney World while also ushering us into the next 50 years and beyond.

At Disney’s Animal Kingdom, you can find sculptures of special Disney characters, including Pumbaa, Timon, Simba, Bambi, Thumper, Dori and Nemo. We’ve shared details on the statues in our earlier story and how they’re bringing a lifetime of memories to all who visit. As you encounter the golden sculptures in the parks, be sure to snap a photo and share on social with #DisneyWorld50.

And for the 18-month celebration, dazzling decorations and magical touches can be found throughout Disney’s Animal Kingdom and our other theme parks.  Disney teams have created all sorts of new decorations that shimmer and sparkle all day and into the night!

The magic is also calling all Foodies to the Walt Disney World Resort 50th anniversary celebration. At Disney’s Animal Kingdom, Disney chefs and mixologists have created delights that include a touch of EARidescent shimmer – and here’s where to find them:

Special merchandise collections have been created for The World’s Most Magical Celebration and they’re now available at Walt Disney World Resort theme parks.  The collections, which are filled with must-have mementos for Disney fans of all ages, can be found at several locations across the resort while supplies last, including Island Mercantile at Disney’s Animal Kingdom.

Also, for the 50th anniversary celebration, the anthem “The Magic Is Calling” can be heard in special live entertainment moments across Walt Disney World Resort, including performances by the Discovery Island Drummers and as the EARidescent Mickey & Friends Flotilla cruises along the Discovery River at Disney’s Animal Kingdom.

As we continue our anniversary festivities during The World’s Most Magical Celebration at Walt Disney World Resort, be sure to follow #DisneyWorld50 on social media and check out all of our stories on our special Everything Walt Disney World 50th page.