Lately there has been debate about the new shower dispensers appearing at a few hotels in the Walt Disney World Resort. These would reduce the need for smaller soaps and shampoo bottles, but people are concerned about the safety of these dispensers.  But, there is something else to consider with the removal of the individual bars and bottles. They are being used to help people around the world.

An Orlando based company called “Clean the World” has been taking the used or tossed bars of soap and shampoo and recycling them into new soap that goes to places like the Salvation Army and the Red Cross. These are turned into hygiene kits that go to impoverished countries around the world. 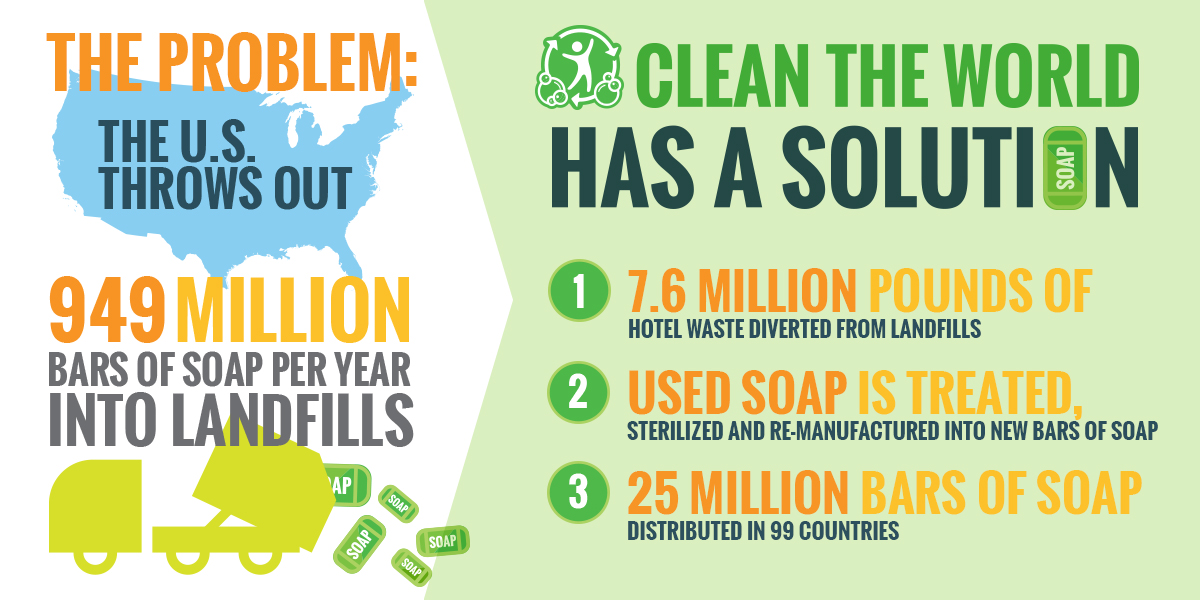 According to an article by Thrillist.com

Last year Clean the World sent out 400,000 hygiene kits and made more than 7 million bars of soap, including half a million bars for Haiti and the Bahamas after Hurricane Matthew.

Children around the world die from issues that could have been easily prevented with proper hygiene. There is a strong correlation between the beginning of this company and the drop in preventable deaths in children.  This is not scientifically tracked, but it is interesting and probably not just coincidence.

The company’s move to recycle soap seven years ago has tracked with a worldwide decline in the number of child deaths. Still, something like 16,000 children under the age of 5 die every day, a quarter of whom are succumbing to pneumonia and diarrhea.

There are over 5,000 companies that participate in this program, including all of the Walt Disney World properties. The companies that participate pay Clean the World .50 per room/per month for them to take away the left over toiletries that are then rebatched into new soap or bottles of shampoo. For the money, Clean the World removes and recycles the toiletries and packages, reducing the waste hotels have to deal with.  In the United States alone 5 million bars are tossed out each day.

This is a topic that goes far beyond a dispenser and no more “free” souvenirs.  It actually might reduce ways to potentially save lives across the globe.

To learn more about this program you can read the article at the Thrillist or visit the Clean the World site.

I get that money is most likely a factor in the decision to use the dispensers, but besides guest safety, there is a larger global issue here.  I think the few cents per guest warrants the continuation of “free” toiletries and support in this program.

Sources:  WDWMagic Forums (Thank you Amused to Death for sharing), Thrillist.com, and Clean the World

[Featured Image from The Odyssey Online ]