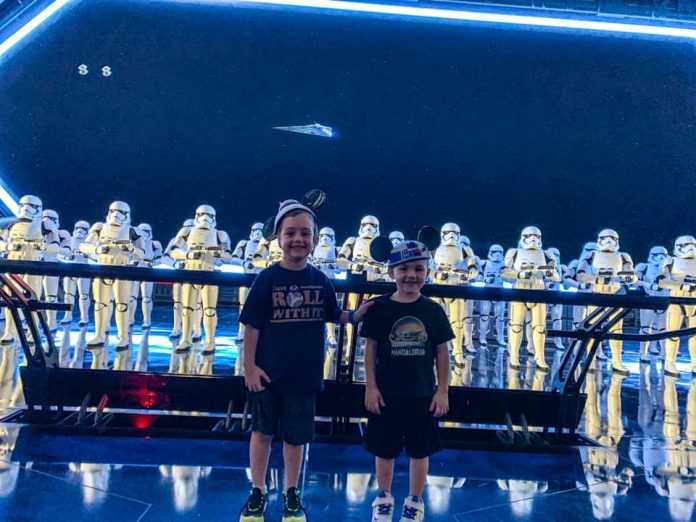 Truth be told, I’m not a planner. So when Star Wars: Rise of the Resistance opened at Walt Disney World and a sea of Disney bloggers were suddenly in a race to write up their “how-to” articles about snagging a boarding group (something you need to obtain, or there’s no chance you’ll experience the ride), I looked away. Anxiety came over me and the sheer thought of having to do something that required multiple steps and countless “tips and tricks,” made me just want to swipe to the next story. That really got me thinking, I can’t be alone in feeling this way. Disney blogs are great and informative, heck- The Kingdom Insider is a Disney blog. But, sometimes we’re bombarded with almost too much information.

I rode ROTR three times, all during the media preview. Of course, this didn’t require a boarding group. Once the ride opened to the public, my personal situation was that I knew it would be at least a month before I’d be back with my family and wanting to ride it with them. I also knew that unlike most bloggers, I wouldn’t be by myself. I’d have my husband and two children (Ages 5 and 6). I could plan until the cows came home, but ultimately my game plan for getting a boarding group depended mostly on how the morning went and if we would be able to get out of our hotel room in time.

I’m going to break down, step by step, not so much a “how-to” plan- but the steps of how our morning went and just exactly what I did. I have to point out, nothing is promised and whether you’re doing what I did, or what another website tells you to do- it’s not guaranteed to work and you aren’t guaranteed a boarding group. That being said, I hope my simple steps will help you and lessen the anxiety of obtaining a boarding group.

ROTR Time Table Of Our Morning (1/25/2020)
5:15 am– Alarms went off. My husband and I woke up, quickly got ready and then woke up our kids. We were out the door by 6:00 am.
6:06 am– Our bus to Hollywood Studios arrived at the Pop Century Bus Stop. There were maybe 30-40 other people waiting at the stop with us.
6:15 am– Arrived at Hollywood Studios
6:30 am– Scanned our Magic Bands and got into the park. We walked towards the area where the Frozen sing-a-long is and waited there.
6:55 am– I opened the MDE app, and started refreshing every few seconds.
7:00am– The park officially opened and we were now allowed to try for a boarding group. You cannot try for a boarding group until the exact second the park opens, the app won’t allow it.
7:01 am– We were assigned to boarding group 43. The app also explained that anyone in boarding group 106 or higher that day, were not guaranteed to ride.
9:22 am– Our boarding group was called, and we were ready to ride!

Over the course of the morning, as I was sharing the progress on our boarding group situation, I received lots of questions. Below are some of them, hopefully, they provide the answers you were looking for.

Q: Does everyone in your party have to be in the park, or can one person go and get a boarding group?
A: Yes, everyone in your party (who wishes to ride the attraction) must be there. The process is based on you scanning your magic band. Once everyone scans it and gets into the park, that’s when they become eligible to be in the boarding group. Once the time comes to try for a group, you will be prompted to click on everyone’s name in your group (much like when you choose the people you want to make Fastpasses for). Their name won’t be on the list unless they are present in the park and scanned their band.

Q: Do you have to stay in the park until your boarding group is called?
A: No. You can stay in the park (we did, and rode other rides like Slinky Dog and Smuggler’s Run) or leave. Once your boarding group is called, you’ll receive a push notification letting you know. From that moment, you have exactly two hours to get back into Hollywood Studios and over to ROTR. *Make sure you allow push notifications on your MDE app.*

Q: Were you on park wifi or off it?
A: Many bloggers are reporting that they actually went off the park wifi and it helped. I stayed on it. Again, I ignored all other blog how-to articles before this and hadn’t really looked into the whole off park wifi theory. I stuck by what I knew and that was staying on the park wifi. It worked fine for me.

Q: Did you avoid crowds and go to a quiet place to ensure you got a boarding group?
A: Nope. I was living in crowd city at the time I obtained boarding group 43. Many websites have said the app worked better and their chances increased by not only going off park wifi, but finding a quiet spot away from crowds. Again, I stuck to what I knew and it worked.

Q:Is DAS pass available for ROTR?
A: Yes. However, we didn’t use it. First of all, to use DAS for ROTR, you need a boarding group. When your group is called you’re instructed to tell a Cast Member at the ride that you have DAS. They issue a return time for you. When we arrived, we inquired about DAS but honestly- it was only a 20-minute wait. So we didn’t even utilize DAS for the attraction. It would’ve made zero sense to wait over 2 hours for our boarding group to be called, only to go back and then get a return time. Especially when the line was only 20 minutes long.

If there’s one “tip” I’ll give you, it’s this- don’t tell your kids what you’re trying to accomplish. I get it, some of you have kids who know and understand what’s going on- but some of us have little ones who are clueless. My boys were concerned about riding Smuggler’s Run that morning, not ROTR. Sure, they knew about the attraction, but that was it. So the night before, and the morning of (when we had to drag them out of bed, while it was still dark out), we just kept telling them the park was opening early. My fear was that I would tell them and we wouldn’t be able to get a boarding group. My husband and I would be left to pick up the pieces of their broken hearts. Once I secured a boarding group, I told them what we were doing there so early and they were beyond excited.

You definitely need to have a plan, and you MUST be outside the park at least an hour before it opens- everything else seems to be sheer luck. Here’s the bottom line, you have to do what works for you. Should I have listened to other sites and gone off park wifi and moved away from the crowds? Maybe. But by sticking to what I knew and what worked for my family, I not only obtained a boarding group- but it was considered to be a lower one. Anything under boarding group 50 is golden. Maybe the stars aligned or maybe me not putting unnecessary stress on myself for the weeks leading up to my family wanting to ride, also helped the situation.