I recently attended my first Mardi Gras at Universal Orlando Resort and it. was. awesome. Between the stunning performers in all their glittery glory, the delicious food that had me wondering how much jambalaya is too much jambalaya, and the thrill of getting pelted with beads — the entire experience was one heck of a party!

While the 2020 Mardi Gras is my first, it is the twenty-fifth for Universal Orlando. To celebrate the occasion, I took the time to sit down with three members of the Entertainment Art & Design team who have worked the Mardi Gras event for several of those 25 years: Lora Sauls (Senior Manager of Creative Development Show Direction), Curtis Hopkins (Scenic Manager), and David Nadolski (Senior Costume Designer). They took the time to share with me (and now me with you!) the stories behind 25 Years of Party.

KATIE: First, just tell me a little about yourselves and how you came to be at Universal.

LORA: I started as a singer and dancer here as the Bride of Frankenstein, but I also had done choreography for a few shows at UO. So I soon left that performing world and became a choreographer, which led me to parades, then onto become a Show Director. My first Mardi Gras was 2001 and I’ve been here ever since.

CURTIS: I started as an intern in 1999 and then in 2000 my boss, who is still my boss, he brought me in for six months of work. That parlayed into freelance for two years, full time as a scenic designer, and then scenic manager. So I’ve been here 19 years, and involved with Mardi Gras since 2005.

DAVID: I started in 1997 and they actually hired me to be a dresser for Mardi Gras, so the performers would come and I’d just give them their costume and they’d go perform in the parade. I had applied to be the costume designer, but I was told they didn’t have that position at the time. I figured I’d get my foot in the door, though, and then in 2000 I had my first opportunity to actually design for Mardi Gras.

KATIE: Could you all kind of explain what your titles mean and what your job actually entails?

LORA: I’m the senior manager of creative development, show direction. So in Art & Design, there is a show direction team, we call ourselves the Creative Development Group,and we create the content for events like Halloween Horror Nights, Holidays and Mardi Gras.

CURTIS: I’m the scenic manager and what that entails is, I am responsible for taking what the show direction team and concept development comes up with and putting the artwork to that and seeing the designs all the way through production and installation. So I oversee the design of the floats and make sure that they look and get built the way they’re supposed to.

DAVID: I’m the senior costume designer and my responsibilities are to design any new costumes or to help develop costumes for any characters that are brought into the park.

KATIE: What is some of the process that happens behind-the-scenes of pulling Mardi Gras together?

CURTIS: We take a trip out to New Orleans every year and work with Kern Studios, which is the company that builds our floats and pretty much 90% of the floats for Mardi Gras in New Orleans. We’ll take a team and go out to their giant warehouses and explore their space looking for props. We basically have to duck down, climb up, crawl over — because these warehouses are just jammed with pieces that we end up designing the floats around.

DAVID: And I wait for him. My  inspiration comes from the floats so once the floats are designed, I usually get the concept drawing of the float and from there I take the colors and the concept of the floats and the theme that the show direction came up with and that’s where the costumes start coming to life.

LORA: Over the course of the years we really have gotten inspiration from a lot of different things. We’ve done seasons of the year, colors, jewels, animal party… we’ve been inspired by all kinds of things, but the biggest thing to be inspired by is the party.

KATIE: What would you say makes Mardi Gras a unique event at Universal?

CURTIS: It’s the one time of year we get to throw a lot of glitter.

LORA: It’s ours! We’re doing our own concept and it’s our own story and so we can tell a story that’s unique to Universal’s Mardi Gras celebration.

KATIE: You all have obviously worked on Mardi Gras for a majority of the years we’ve held the event. How would you say you’ve seen it evolve?

LORA: We’ve seen it get bigger, better, and longer.

DAVID: I see a refinement as well. Everything is much more put together and themed. Back then, like the year colors was a theme, I designed for orange. I designed these big orange bells and girls with pumpkin sleeves. It didn’t make any sense! It was just whatever was orange.

CURTIS: I’ve been on Mardi Gras for 15 out of its 25 years and I’ve seen it get more elaborate and more extravagant and more detailed. Kern Studios has even incorporated some of our pieces into their floats in New Orleans, and that’s one of the things I’m very proud of. And then from a fan standpoint, watching my kids over the years chucking beads out into the crowd. As a parent, you can’t help but smile that your kids are loving something you helped create.

KATIE: What are you guys most looking forward to for this year’s event?

LORA: The theme! Treasures of the Deep. We had a lot of fun with it.

CURTIS: The new floats look good and we’ve done some enhancements to some of our stock floats that are really neat.

DAVID: There are some deep sea creature stilt walkers, an octopus, and a squid that are all kind of fun—

KATIE: So you all have been working on this event between 15-23 years. Do you guys have a favorite year?

LORA: Seasons. It was the first time we incorporated smells onto the floats. So when fall went by, it had this apple-cinnamon-pumpkin-pie smell.

CURTIS: There are two years that I feel like we really amped up the level of detail — the storybooks year and then the kind of modes of transportation year. It had a kind of steampunk element to it.

DAVID: Those were my favorites, too. There are so many different float designs those years that I could pull costume ideas from, yet it still felt cohesive because of the theme going throughout all the floats.

LORA: Every year you feel like you can’t think of anything new or different, but as soon as we go to New Orleans, it’s like, ‘there it is.’ It’s just fun working with such creative people. We can see a prop at Kern Studios and I never in a million years would be able to think of how Curtis will be able to use it in a float, but he brings it to life in this unique way. And then David will come up with these creative costumes and bring it all together. It’s pretty amazing. We get to work on so many cool events, but it’s the fact that we get to work on them together. And that may be really sappy, but we’re a family. We’ve been to each other’s weddings and we’ve been around for so much of each other’s lives. Mardi Gras is just one of the things that we get to take on as a team.

Universal Orlando’s Mardi Gras 2020 takes place every night from Feb. 1 – Apr. 2. Get more details and join us for a night of party soon!

This content was originally published on February 18, 2020 2:56 pm on the official Universal Orlando Resort Blog. The Kingdom Insider takes no responsibility for errors in syndicated content. 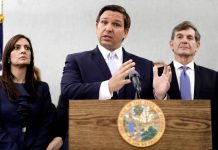 FL Governor Addressed the State- “They are really working hard to keep those theme parks in good, working order.”