For Disney fans wondering whether or not Pandora – The World of Avatar would glow with bioluminescent light at night, that question has finally been answered thanks to a recent Bloomberg article.

New photos were released yesterday that clearly show that Walt Disney World’s Pandora will mimic the 2010 film Avatar and “come alive” at night. 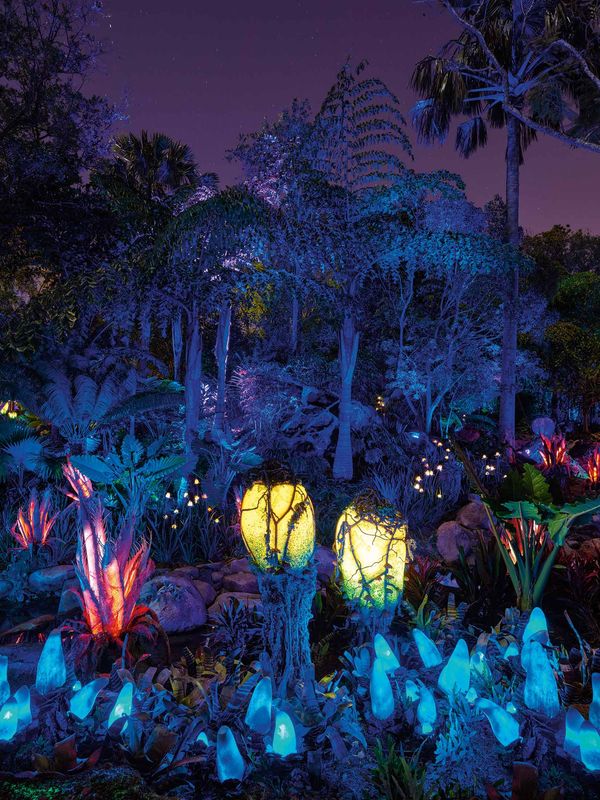 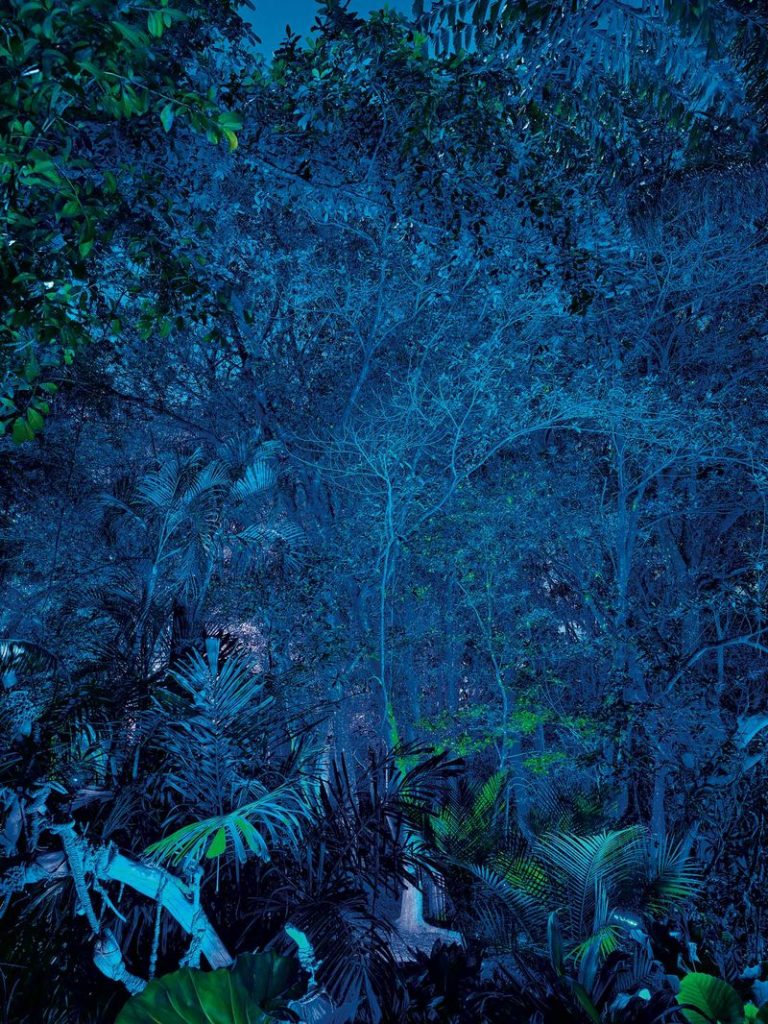 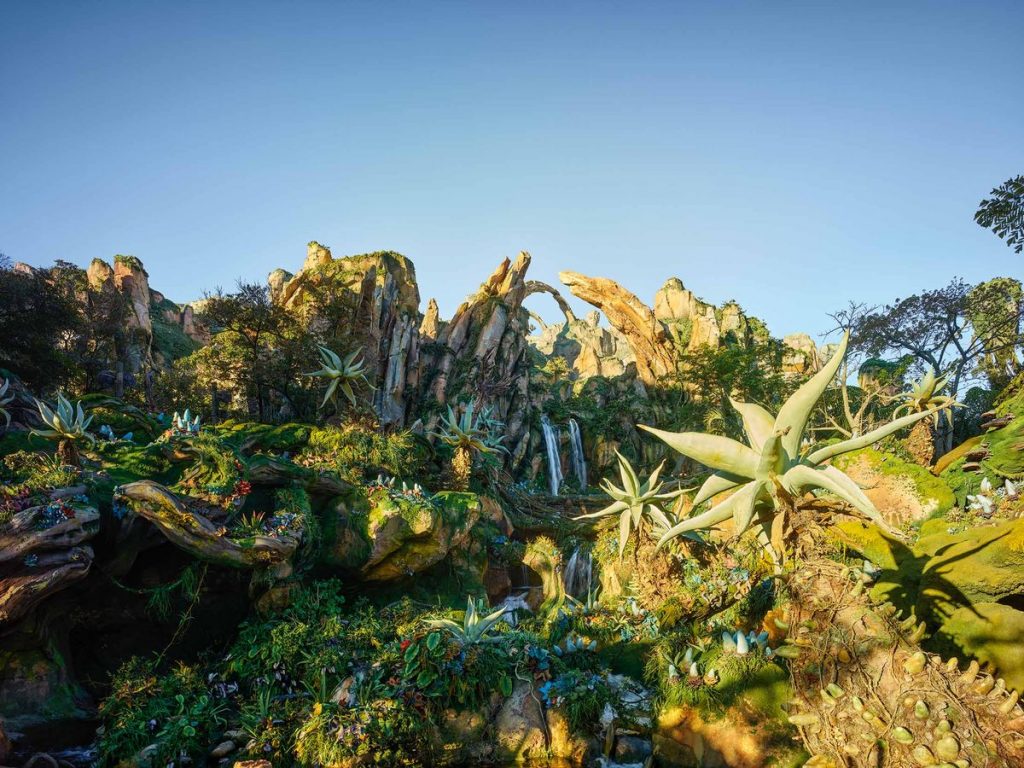 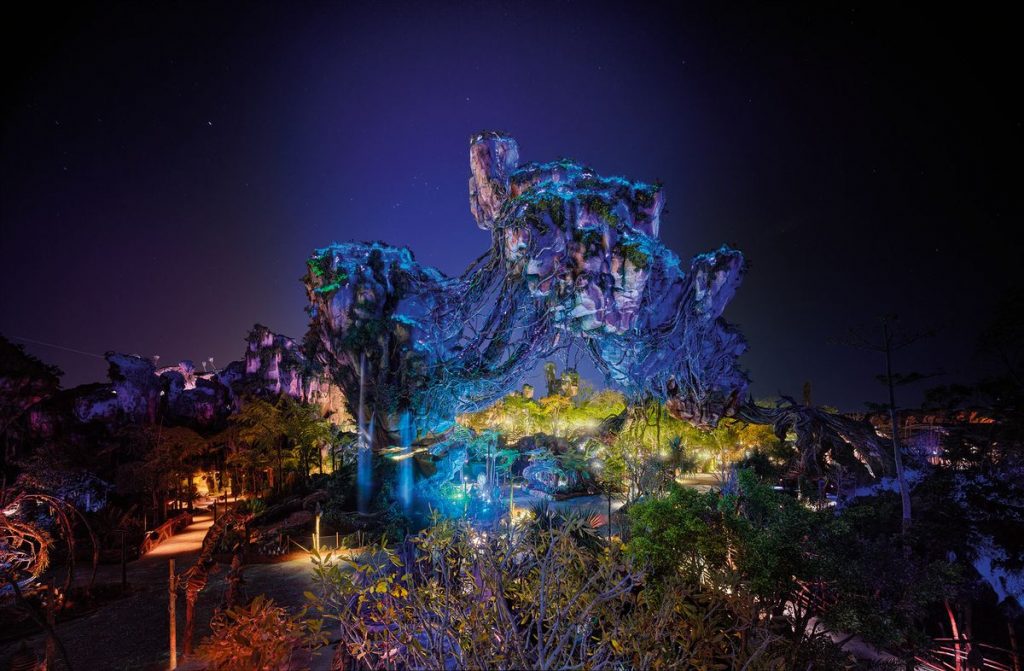 Rohde doesn’t just want you to be dazzled by the attraction’s two rides—one of which simulates a bucking banshee expedition and the other a calmer journey through the mystical Pandoran jungle, whose replicas of Avatar’s bioluminescent plants and floating mountains are being attended to by teams of brown-helmeted Imagineers and construction workers. Even if you’re looking down, Rohde wants you to feel as if you’re still in Alpha Centauri. “We are obsessive,” he says.

… and about Disney’s increased competition from Universal.

The Wizarding Worlds set a new standard for theme park inventiveness and put Universal’s Orlando attractions in a position to overtake Animal Kingdom and Disney’s Hollywood Studios, the weakest performers among Disney World’s four parks. “Things have really reversed: Disney used to lead. Now Disney’s following Universal,” says Gary Goddard, a theme park designer in North Hollywood who’s worked for both companies. But, he adds, “in doing so they’re going to try to top it.”

Bloomberg talks about how Disney is betting heavy on Avatar, a non-Disney IP that hasn’t really shown that it has legs like Harry Potter. But all of this could just be a practice run for Star Wars Land, which is coming in 2019.

As we talked about earlier this month, competition from Universal is a good thing for Disney fans. We’ve seen more Disney expansion since Harry Potter opened than we had in the previous decade. Whether or not Pandora lives up to the hype remains to be seen. But even if it doesn’t Star Wars is right around the corner, and I fully expect that one to blow us away.

The article is a fascinating read and sheds light on just how fierce this competition is going to be. In the end, it’s likely that theme park fans will be the real winners, even if the individual resorts suffer a few black eyes in the process.

Are you impressed with Pandora? Comment below or in the forums.