Unless you’ve been living in an alternate multiverse, you’ve probably heard that Avengers Campus is officially open to guests at Disney California Adventure park. To help you prepare for your heroic training encounters, I’ve assembled the perfect lineup of Super Hero films and series to watch while you wait to visit the land for yourself: Recruits, assemble (on your couch) and immerse yourself in some of your favorite heroic stories on Disney+ before you see them come to life at Avengers Campus!

In preparation for your visit, why not start by watching the land’s namesake team of Super Heroes form in “The Avengers?” Your mouth may water when you see them chowing down at their favorite food joint, Shawarma Palace, but don’t worry; you can get your hands on your own savory wrap at Shawarma Palace in Avengers Campus! After you’ve seen the super team assemble, check out “Iron Man,” the first film of this modern cinematic universe. You’ll want to remember how Tony Stark created his famous weaponized suit of armor before you see it in person at Avengers Campus! Then, see how do-gooder Steve Rogers became super soldier Captain America in “Captain America: The First Avenger.”

Speaking of Cap– spoiler alert: There’s a new Captain America in town. To dig deeper into that, watch fan favorite Super Hero besties on “The Falcon and the Winter Soldier.” All six episodes are streaming now exclusively on Disney+.

Do you love the thrills and drops of Guardians of the Galaxy – Mission: BREAKOUT! as much as I do? Before you get blasted into this harrowing mission, a fan favorite that opened in 2017, re-acquaint yourself with the crew by watching “Guardians of the Galaxy.” And in preparation for visiting the Ancient Sanctum in Avengers Campus, journey into mysticism and alternate dimensions with “Doctor Strange.”

Take a trip back to the ’90s and go “higher, further, faster” with “Captain Marvel,” before you see Carol Danvers herself at Avengers Campus. I especially love all the throwback songs in this movie that really take me back…

You’ll be shouting “Wakanda forever!” when you see Black Panther, General Okoye, and the Dora Milaje in action at Avengers Campus. Pump yourself up by watching T’Challa’s rise to the throne as King of Wakanda in “Black Panther.”

Okay, I have been DREAMING about eating giant pretzels in Pym Test Kitchen featuring IMPOSSIBLE™ at the new Avengers Campus. Before you indulge in the yumminess, enlighten yourself on the shrink-and-grow technology of Pym Particles that made these ginormous snacks and tiny treats a reality by watching “Ant-Man and The Wasp!”

Get further acquainted with Thor and his brother Loki in “Thor.” You’re going to get to know the God of Mischief a whole lot better now that the new series “Loki” has premiered on Disney+. Are you excited?! And in less than a month, get ready for epic action in the origin story of one of our favorite heroines in “Black Widow,” coming to Disney+ with Premier Access (Additional Fee Required) on July 9. There is definitely no shortage of heroic content for us to consume.

Make sure you’ve subscribed to Disney+ so that you’re fully brushed up on the fan favorite Super Heroes’ stories. Now you’re ready to live out your own Super Hero dreams! Avengers Campus is now training the next generation of Super Heroes in this fully immersive land that mixes innovative technology and fun for all ages. So, suit up, and I’ll see you there! 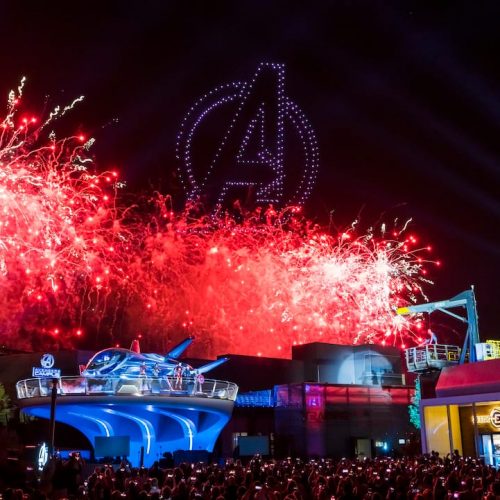