I have been going to Knott’s Scary Farm every year since I was in middle school, so it’s been 15+ years of running through the fog during the Halloween season at Knott’s Scary Farm for me. Last year Knott’s Scary Farm was cancelled due to the pandemic so when I went this past weekend it was extra exciting. It was not the experience I was hoping for, but it was still a lot of fun!

I started out my night at the Haunted Lounge at Amber Waves restaurant inside the Knott’s Berry Farm Hotel next-door to the park. The Amber Waves bar gets decorated every year for Halloween time and they deck the place out with cobweb, black lights, spiders, skulls, etc. They even have an entire Halloween-themed menu with food and drinks. It’s a really awesome place to grab a drink and a bite to eat before heading into Knott’s Scary Farm, as the monsters will come through to pop their head over your shoulder to start the scares and they will take a picture with you. It’s a pretty awesome dining experience! 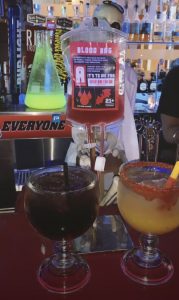 Normally in past years when I have gone to Knott’s Scary Farm I am able to walk up to security very quickly, but this year there was a line probably about a mile long to get to security. I got there a half hour before opening (which is at 7pm) and I got through security and to the front gate in about 30-40 minutes. It wasn’t awful but then again it wasn’t as quick as previous years. I heard it took some people about an hour and a half to get in, so if you have plans to go I recommend getting there early before opening to hop in line!

I have never felt the need to get the Fright & Fast Lane (front of the line) ticket at Knott’s Scary Farm in past years as I don’t mind waiting 30-40 minutes for a maze, but this year seemed way extra crowded as most maze lines were about anywhere from an hour and a half to two hours long! When you have 8 mazes to get through in only a few hours it makes it impossible when the lines are that long. We did not have the patience to wait that long for mazes so we managed to squeeze in three mazes, one show, and of course I had to get Knott’s Berry Farm’s famous boysenberry funnel cake!

The three mazes I was able to get through was The Depths, Pumpkin Eater, and Paranormal Inc. All three mazes were really well done with great special effects and plenty of scares around every corner. Paranormal was really well done as far as scares go. There was so much going on in this maze and it seemed as though monsters were coming out of the walls and every time you turned a corner and it was pretty terrifying. The most creative one was Pumpkin Eater as it had classic scary jack-lantern. When you enter the maze it’s as if you are traveling through rotting jack-o-lantern so you have all sorts of animatronic bugs on the walls and evil pumpkin monsters are waiting to scare you within the depths of the maze. Although I’m disappointed I was not able to experience all the other awesome sounding mazes, I did have fun in the three I was able to make it through!

It was disappointing how crowded it was in the park, but I will say the scare zones were awesome this year. Sometime it can feel as though the monsters and scares are lacking in the scare zones, but not this year! Every scare zone I went through had plenty of monsters lurking in the fog and they gave everyone walking around a scare or two! Going through the thick fog in Ghost Town is a really spooky experience as you see pumpkins flickering in the darkness and monstrous figures lurking by or sliding past on their knees causing sparks to fly up. The CarnEVIL scare zone is also pretty freaky as there are many scary clowns are wandering all over, some with chainsaws (fake of course) and some with clown horns. They really know how to chase people down over there!

All in all it was a great night celebrating an annual Halloween tradition, however I will say that if this year is a sign of the event getting more crowded going forward I would get the Fright & Fast Lane ticket added on to your admission in order to bypass the extremely long lines or you won’t get to experience very many mazes. Pricing on tickets and the front of the line pass varies depending on what night you go (you can check pricing here). 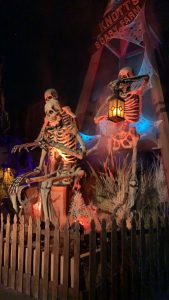 Have you been to Knott’s Scary Farm this year? Tell us about your experience in the comments! 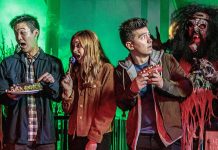 Check Out The Eerie Eats and Treats at Knott’s Scary Farm This Year! 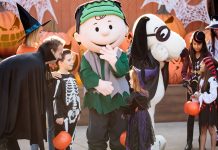 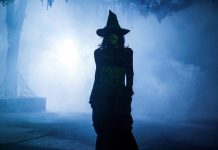 Knott’s Scary Farm Is Returning For the 2021 Season! 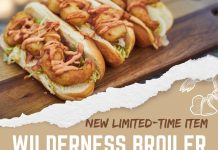 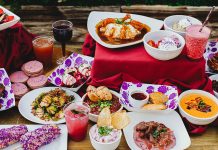 Review of the Boysenberry Festival at Knott’s Berry Farm! 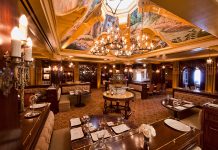