“From the looks of it I’d say it was Roger. My honey bunny was never very good behind the wheel.”

Per The OC Register:

Roger Rabbit’s Car Toon Spin at Disneyland is getting a new plot twist that throws Jessica Rabbit into the lead role as a private eye determined to stamp out a Toontown crime wave.

Some scenes in Roger Rabbit’s Car Toon Spin featuring Jessica Rabbit are being updated to be more relevant and reflect a new twist in the character’s story within the attraction, according to Disneyland officials. A scene featuring Jessica Rabbit and the weasels with an automobile as well as the finale scene of Roger Rabbit’s Car Toon Spin are being updated, according to Disneyland officials.

Roger Rabbit’s Cartoon Spin has always been one of my favorite attractions inside Toontown because it’s just so wacky and fun, and it has a pretty great queue! You can spin your vehicle a full 360 degrees as you try to drive along the crazy course and regain control of your cab.

The current description of this ride (it has not been updated for the new, upcoming storyline yet) on the Disneyland website reads:

Catch a ride in a taxi and follow Roger Rabbit and Benny the Cab as they race through Toontown in search of Jessica Rabbit. Beware—the villainous Weasels are pouring slippery Toon-melting Dip in the paths of passing vehicles—including yours!

Crash and dash into Bullina’s China Shop and slip and slide through the Power House. Spin wildly into the Gag Warehouse storage area, where the Weasels are waiting to take aim at your cab.

Is this the end of the line for you and Roger Rabbit? Don’t count on it!

There is no official date as to when the updates will be completed, but we can’t wait to experience the new storyline once it is finished!

How excited are you for this new update to Roger Rabbit’s Cartoon Spin?! 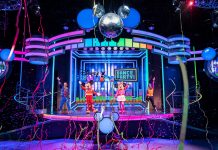