While we may not have access to Star Wars: Galaxy’s Edge, or banthas for that matter, we can recreate everyone’s favorite beverage, the infamous Blue Milk, right in our very own kitchen!

We were first introduced to Blue Milk in the 1977 film Star Wars: Episode IV A New Hope. Four more decades would pass before Star Wars fans were offered the opportunity to sip this famous liquid in real life! The famous Blue Milk can be purchased at The Milk Stand at Star Wars Galaxy’s Edge in Hollywood Studios at the Walt Disney World Resort and at Disneyland. Blue Milk has become a guest favorite at both locations since opening in 2019.

Did you know Blue Milk is Vegan at both Walt Disney World at Disneyland Milk Stand locations? You may be surprised to learn that Blue Milk really isn’t traditional milk at all. In fact, it is more closely related to a smoothie. The true parks version starts with a base of rice milk powder and coconut oil with added sugar and natural flavors, such as pineapple, lime, dragon fruit and watermelon. The blue coloring is from spirulina which is a blue-green algae sometimes taken as a dietary supplement. Only a small amount is needed to deliver the vibrant yet soft blue hue. The concoction sounds quite random but it is actually quite delicious! Mark Hamil himself stated “…this frosty non-dairy drink tasted like a yummy fruit smoothie.” He prefaced this statement by noting that the true blue milk used on set for the movie wasn’t quite as satisfying (credit to the cast for leading us to believe otherwise).

You can enjoy a non-alcoholic Blue Milk from the Milk Stand for $7.99 or 1 Disney Dining Plan Snack Credit. An alcoholic version with rum is also available for almost twice the price at $14.00 at Disney’s Hollywood Studios (only the non-booze Blue Milk is available in Disneyland).

I will do you one better and offer you up a way to make this tasty beverage at home for a lot less money! Any dairy milk or non-dairy alternative milk can be used in this recipe. My kids love this as a fun beverage and I don’t mind serving it due to its healthy ingredients. Check out our TKI Homemade Blue Milk Recipe below! 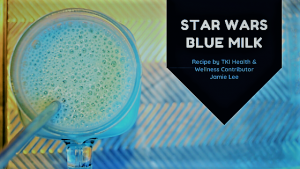 Hungry for more, you are? Make it a heartier snack by adding the Chewie Chews Oatmeal Cookies to your plate! They’re one of my favorite recipes from Disney Family! Have your kids help prepare them. Watch the video below.

For more fun Disney at home, check out the articles below!