Are you missing Star Wars Galaxy’s Edge? We’ve got the cure for you! But first an important question – are you team BLUE milk or GREEN milk? I know it is tough to answer, so why not make them both at home and have an out-of-this-world taste test! I shared my Blue Milk recipe HERE so be sure to check it out and have it on hand when you’re ready for the duel of these two flavors. This new curated Green Milk recipe is as close as I can get to the real Star Wars Galaxy’s Edge Green Milk at Disney Parks!

Star Wars fans will recognize Green Milk as the milk of the female Thala-Sirens which was consumed by Luke Skywalker first seen in the movie “The Last Jedi.” Fans of Disney Parks may simply know it as the neon green beverage sold at Star Wars Galaxy’s Edge at Disney’s Hollywood Studios in Walt Disney World and at Disney Land Resort. It is said that while filming the movie, the beverage was actually just coconut milk that was later altered through technology to appear green in the famous scene. However, you get the real deal when you order this drink in Disney Parks.

Don’t let the term “milk” fool you here. Both Green and Blue milk found at Star War’s Galaxy’s Edge is a vegan beverage, meaning they are safe for vegans, vegetarians, lactose intolerant guests and those with a dairy allergy. Green milk is truly more of a smoothie and slushy in nature with a citrus base. It can be quite refreshing on a hot day in Disney Parks! You will pick up hints of passion fruit, grapefruit, orange and orange blossom. The ingredient label includes items such as rice milk powder, coconut oil, and added sugars, plus other stabilizers, natural flavors and thickeners. Although we have universally agreed to recognize the milk as “green” it is more of a neon yellow with a green tint and gets its unique hue from natural food coloring – a combination of turmeric, spirulina and beta carotene.

You can enjoy a non-alcoholic Green Milk from the Milk Stand for $7.99 or 1 Disney Dining Plan Snack Credit. An alcoholic version with rum is also available for almost twice the price at $14.00 at Disney’s Hollywood Studios (only the non-booze Green Milk is available in Disneyland).

Check out The Milk Stand and more of the offerings in the Disney Eats video below!

Here’s how I created this homemade DIY version of Star Wars Galaxy’s Edge Green Milk! It took quite some time to get the color just right, so be sure to add color slowly! 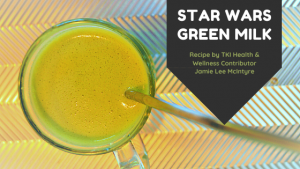 Want to make it a meal? Serve up this Green Milk Recipe with BB8 Pancakes from the Disney Eats video below!

Looking for more DIY Disney recipes? Check out the links below! This Disney-loving Dietitian is always coming up with tasty and better-for-you ways to bring the magic of Disney Parks into your kitchen at home. Share your TKI Disney-Inspired recipe creations on our Facebook page or leave a comment below! Which is your favorite recipe?

Everything You Need to Know About the NBA and Disney
Gideon’s Bakehouse is Coming to Disney Springs!