Ok you sang that in your head right? The catchiest Marvel song of the year sung by Kathryn Hahn’s in WandaVision song is an Emmy winner! The Marvel-out song,”Agatha All Along,” has been stuck in so many of our heads since watching WandaVision and now it has won Outstanding Original Music and Lyrics at this weekend’s Creative Arts Emmy Awards. Just in case you need a refresher on how the song goes, here you go (and you’re welcome)!

Yep, now that’s going to be stuck in my head for another week but isn’t it just so fun?! Oscar winners Robert Lopez and Kristen Anderson-Lopez composed the track (they also composed the soundtracks for both Frozen films as well), which was performed by Kathryn Hahn in all her villainous, cackling glory. The song’s big win shouldn’t come as a huge surprise. It became a hit almost instantly the night that episode 7 of WandaVision aired. Hahn previously told Entertainment Weekly that even she was taken aback by how quickly the song spread.

“I remember somebody telling me that I was on the iTunes chart,” she said. “I was ahead of Bieber for a second. I was like, ‘What is going on!’ That, I credit to [the Lopezes] for writing such a crazy, incredible jingle that just could not get out of your head. We had so much fun filming her delicious reveal.”

Per Yahoo News, “Anderson-Lopez, in accepting the award, said she and her husband hadn’t been in Los Angeles in 21 months and ‘every return to normalcy should come with a big party and a shiny statue.’ She called the ‘WandaVision’ track ‘a dream come true for us to write.’ Backstage afterwards, Lopez said that the song was written prior to shooting but that Hahn ‘brought it to the next level, and then another level, and another.’ ”

You can watch their full exclusive interview with Variety in how they came up with this wickedly good “Muensters”/”Addams Family”-inspired song here! 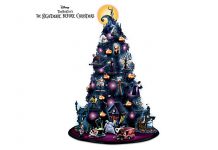