I have really exciting news Insiders! For those of you that hold a special place for your heart for Port Orleans Riverside, you probably know all about Yehaa Bob Jackson’s special performances at the resort. Unfortunately he was laid off due to the pandemic. The resort will be finally reopening on October 14, and many have been wondering if he’d be making a return. Well we officially have confirmation as Bob Jackson himself has officially confirmed on his Facebook page that he will be returning to perform starting October 14! 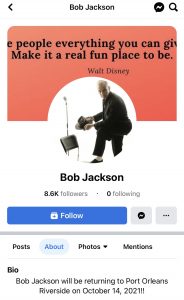 He also posted a video to announce his return which disneyrecordguy re-posted in this Twitter video below:

If you aren’t familiar with Yehaa Bob Jackson, he is a local legend around Port Orleans Riverside Resort. He performs at the River Roost Lounge and is best known for his boogie-woogie musical stylings and comedy. He plays many Disney classics which will have everyone singing and dancing along with him. His hilarious show has earned him a 23-year long run so far at the resort and when he was laid off last October many fans were pretty devastated. It’s perfect that Disney will have him return to his stage on the reopening day of the resort. Not a lot of details have been released yet such as how many days a week he will be performing so stay tuned on the Disney website as we get closer to his return if you’re interested in catching one of his performances! 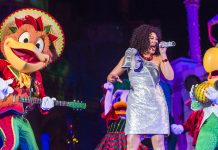