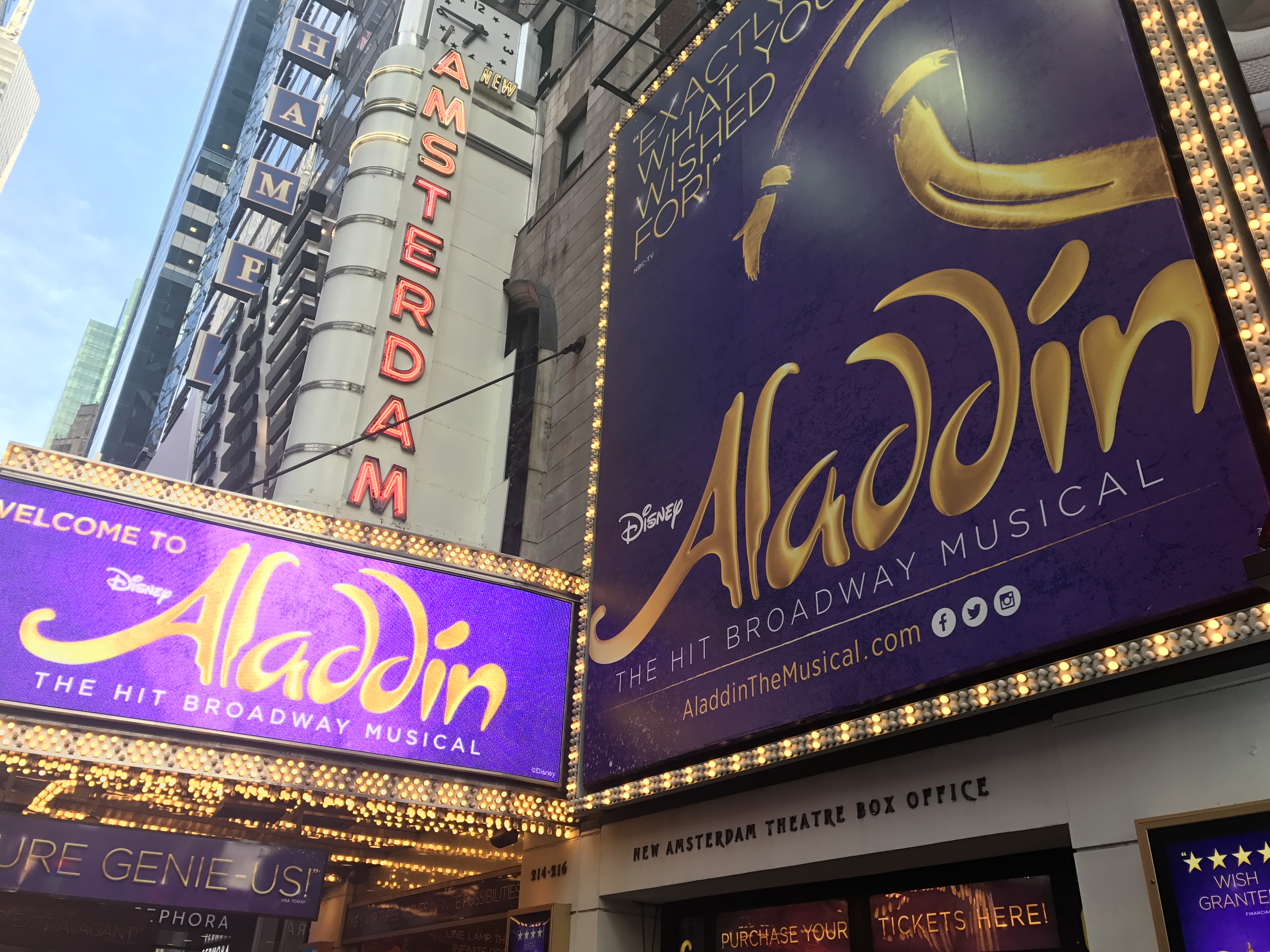 On August 22, 2017, I attended the performance of Disney’s Aladdin on Broadway at the New Amsterdam Theatre. Let me just start off by saying what a great performance this was and it is not to be missed.

The Cast of Aladdin 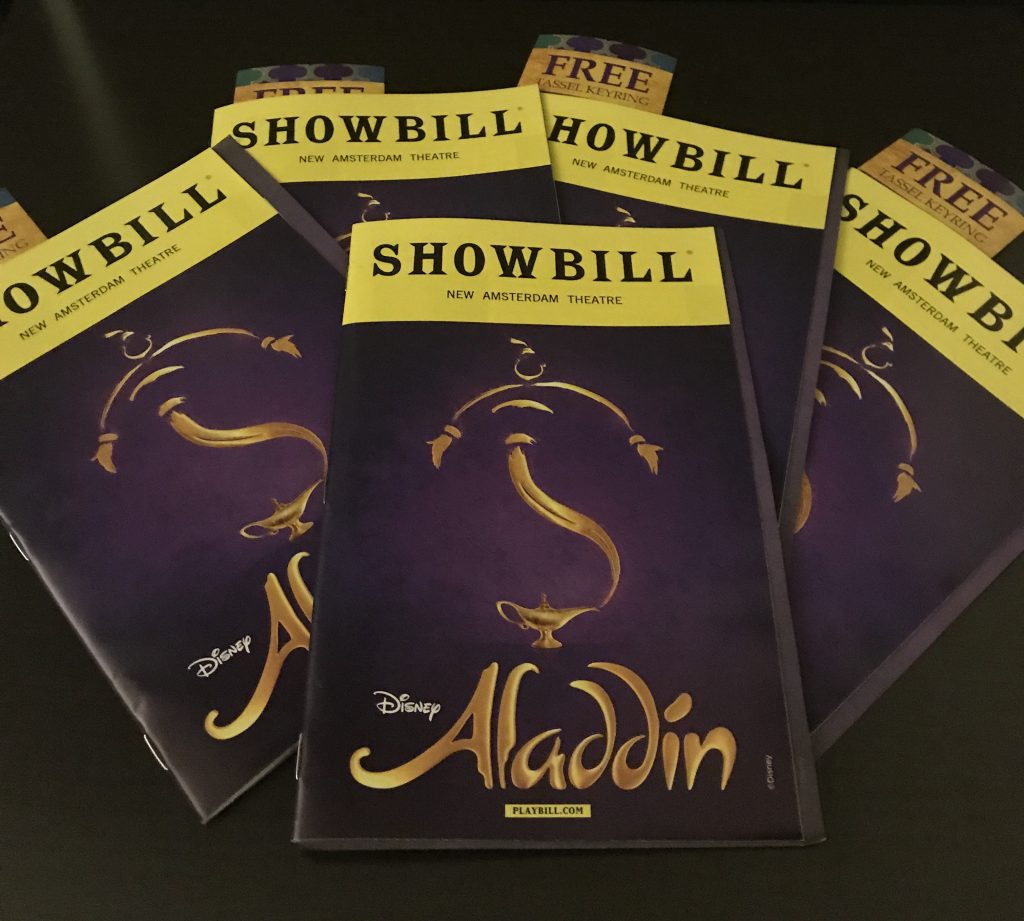 There was magic in the air that night, Major Attaway, who played Genie opened the show. What an amazing actor! He had great stage presence and pulled the audience in with his amazing voice and comedic performance. Don Darryl Rivera, Iago, stole the show. Iago had everyone in stitches. His witty banter with Jafar, played by Jonahan Freeman, was great comedic relief. The three friends of Aladdin; Omar, Babkak and Kassim (not part of the original movie) played respectively by Brad Weinstock, Brian Gonzales and Steel Burkhardt, were a great addition to the show. Almost like the “Three Stooges” Kassim led the motley crew through some great musical numbers which Babkak always making food puns (as they were also poor “Street Rats” along with Aladdin). Finally you have Telly Leung and Courtney Reed who portrayed Aladdin and Jasmine. They both transported us to “A Whole New World” and nailed their special Broadway musical numbers. 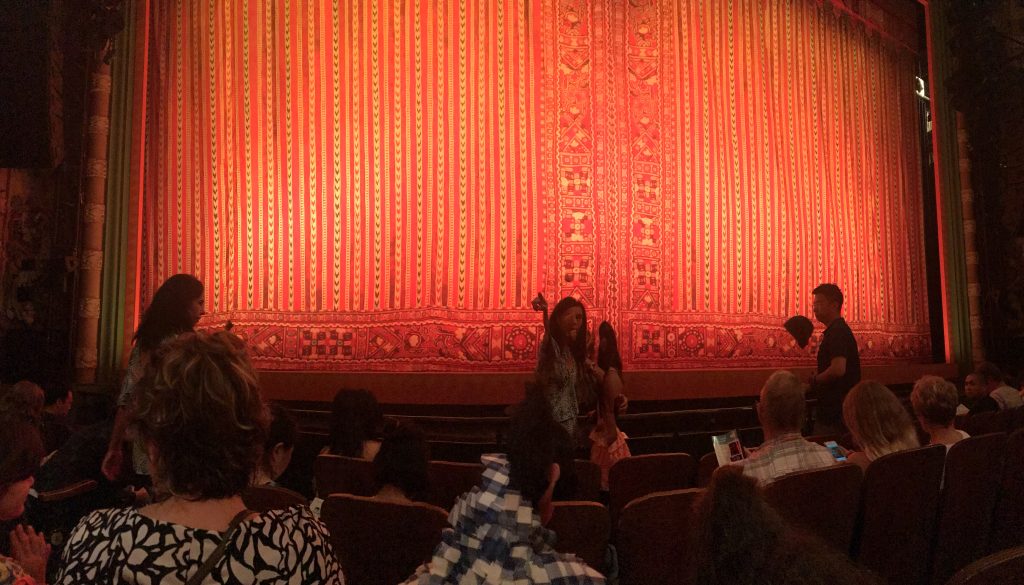 Aladdin features 337 unique costumes, designed by Tony Award winner Gregg Barnes, which were all handcrafted specifically for this show. One pair of chorus members’ costumes includes 1,428 Swarovski sewn in crystals. The show also features 84 illusions and effects from dazzling pyrotechnics to the magic carpet ride from the hit song “A Whole New World”. In addition to “A Whole New World”, the Broadway performance included “Arabian Nights”, “One Jump Ahead”, “Friend Like Me and “Prince Al from the hit 1992 animated movie.

Additionally, there were many new songs to include “Proud of Your Boy”, “Babkak, Omar, Aladdin and Kassim”, “High Adventure” and “Somebody’s Got Your Back”. Overall, the show was amazing and if you are a fan of Disney, Theatre or specifically Aladdin, then you definitely do not want to miss this one. I bought my ticket through Ticketmaster 1 week before and there were still plenty of seats available.

Also currently available on Broadway, Disney’s The Lion King is performing at the Minskoff Theater. Finally, for the “First Time in Forever”, Frozen: The Broadway Musical will be opening in February 2018 at the Legendary St. James Theatre.

Have you seen the performance of Disney’s Aladdin? What did you think? Are you excited for Frozen: The Broadway Musical in 2018? Let us know in the comments below.