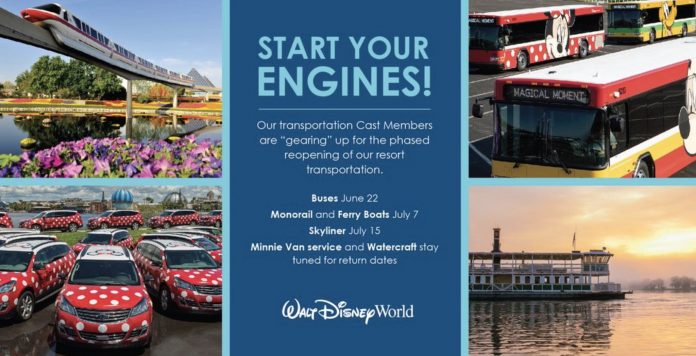 We’re less than a week away from returning to the magic, and Walt Disney World just shared an update on transportation.

Getting to Disney Water Parks from a Disney Resort Hotel

Getting to Disney Springs

Please ask a Cast Member to assist you in planning your trip from one park to another. The most direct route may involve a combination of bus, monorail, boat or walking.

Turn your travel into a treat on our fleet of boats that’s an attraction in itself.

Take in the scenery and relax with welcome breezes as you sail around Seven Seas Lagoon and Bay Lake. Feel the wind in your hair and the magic in the air as you cruise Crescent Lake and Lake Hollywood. Water taxis and ferries sail to and from Magic Kingdom park, Epcot, Disney’s Hollywood Studios and Disney Springs. Most routes run on 15- to 30-minute intervals.

Epcot and Disney’s Hollywood Studios
Accessible by boat from:

Disney Springs
Accessible by ferryboat from:

Hours of operation vary subject to water and weather conditions. Please note that no luggage or alcohol of any type is permitted on Disney watercraft. All strollers must be folded and stowed out of the aisle. Medical strollers for disabled Guests will be treated as wheelchairs.


Soar high in the sky aboard our world-famous monorail—originally conceived as a public transport for the future!

Additionally, there are express round-trip services from the Transportation and Ticket Center to 2 theme parks: Epcot and Magic Kingdom park.

Glide across the sky on this grand, state-of-the-art gondola system, conveniently connecting Disney’s Hollywood Studios and the International Gateway at Epcot to the following Disney Resort hotels:

Minnie Vans and other watercraft  Stay tuned for return dates.